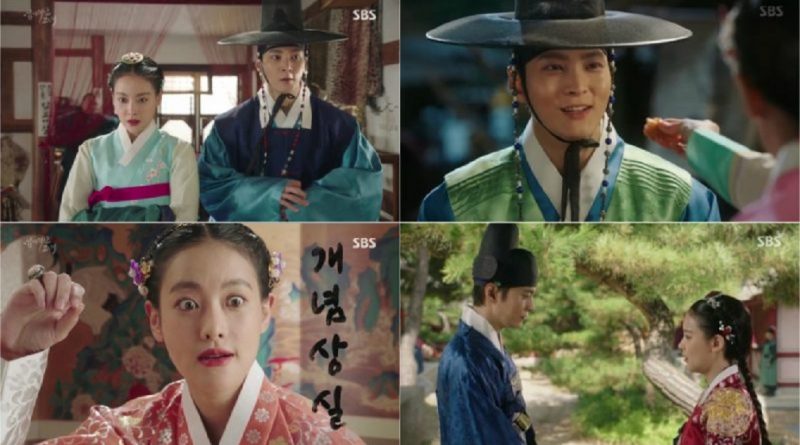 Gyun Woo looked at the stingray dish and waved, “People ask me to go out to eat”, and refused it. But Princess Hyemyung instead said, “I lost my patience. A lot of people are starving, but you just throw away this food?”. Then Princess Hyemyung put kimchi and stingray in Gyun Woo’s mouth.

“You ask for help when your leg hurts. Ask to be saved from the evil bandits. But what kind of treatment is this, never say thank you”, said Gyun Woo. Then Princess Hyemyung said, “Give me back my ring”, she insisted. ”

Princess Hyemyung was drinking alcohol until the last bottle. Inevitably, Gyun Woo had to carry her while trying to found the way back to her house. Gyun Woo also said, “I can’t leave you alone”, then rest for a while under a tree. Princess Hyemyung fell asleep on Gyun Woo’s shoulder and made Gyun Woo smile shyly.

Then, Gyun Woo was assigned to be the teacher of the prince and finally returned to meet Princess Hyemyung inside the palace.

After that, Gyun Woo also offered, “If I find the ring, will you stop calling me a fool?” Finally, Gyun Woo and Princess Hyemyung searched for the ring together. The continuation of their full of bickering story is impatiently awaited by the public.