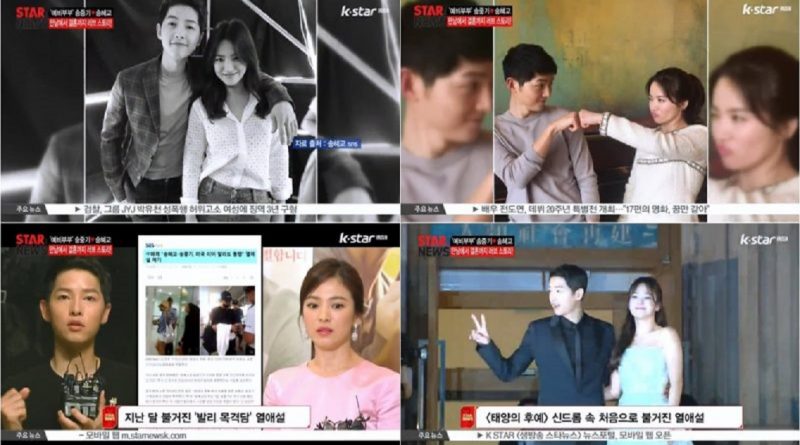 The couple from ‘Descendant of the Sun’ becomes a couple in the real world! Song Joong Ki and Song Hye Kyo, who have repeatedly denied to be in a relationship, announced their wedding date on the morning of July 5th.

Last year, both actors got a lot of attention and popularity from inside and outside the country thanks to ‘Descendant of the Sun’. ‘Descendant of the Sun’ was Song Joong Ki’s first drama after returning from the military. It was also Song Hye Kyo’s Korean drama comeback after previously focusing on Chinese drama for about 3 years. Their chemistry had been such a great source of topic because of its excellence, they even earned the nickname ‘Song-Song Couple’.

Last year in March, as ‘Descendant of the Sun’ has created quite syndrome and became popular, the couple was hit by the first dating rumor. At that time, there were witnesses who stated that ‘I saw these two people shopping in USA’, but Song Hye Kyo’s agency denied it and said, ‘They were just having a holiday in New York at the same time and decided to eat together’, while Joong Ki’s side gave similar response.

This year, a Chinese media reported that both were seen spending their time in Bali together. In response, Song Joong Ki’s agency said “Before the press conference of ‘Battleship Island’, Song Joong Ki went on holiday to Bali with his friends. He was not aware that Song Hye Kyo had a schedule there at the same time” Both sides of the couple have repeatedly denied their dating rumor.

02.42 – 02.55: In the press release, their agencies said, ‘Marriage involves a meeting of two families, so we have to be careful. Until the time of marriage is determined, we can not say anything, but now, we have finally had the opportunity to say it’ This abrupt marriage announcement is likely to have an impact on Song Joong Ki’s movie, ‘Battleship Island’, which is going to be released on July 26.

Song-Song Couple has become a hot issue because of their sudden marriage announcement after denying their relationship several times. The couple is going to be married on the last day of October. Up to now, they continue to be flooded with congratulations as well as jealousy from fans.

April 7, 2017 Tri Comments Off on Things That Hallyu Stars Are Hiding?