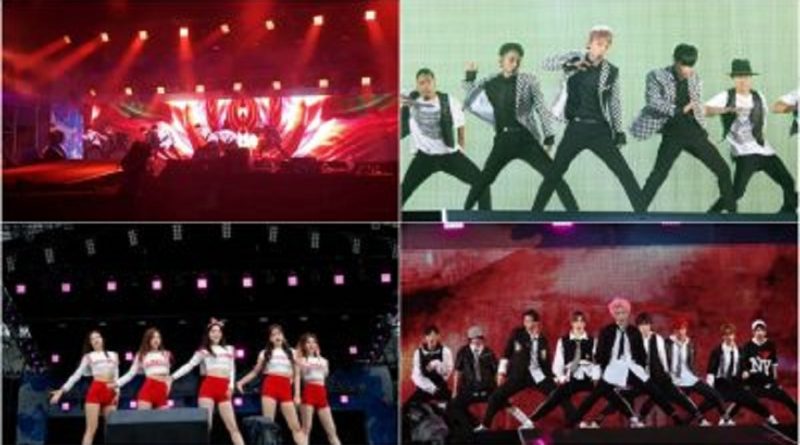 EXO, Red Velvet, NCT 127 on the 26th and 27th, held their first ‘A-Nation 2017’ concert at Ajinomoto Stadium Tokyo , Japan. Their remarkable performance attracted 55 thousand spectators and gained a tremendous response, ensuring the popularity of the groups.

EXO performed 6 songs which are  Ko Ko Bop, Monster, Lotto, and other single hits, such as ‘Do Not Go’, ‘Coming Over’, to ‘Drop That’. They showcased different sides of them helped by the colorful and cool stage decoration. They also communicate with the audience in fluent Japanese and deliver the news about the 4th world tour, which will be held in December.

In addition, EXO-CBX (EXO-ChenBaekXi) also appeared as a special guest at the event. The title of their first mini album “Hey Mama!” (Japanese version), including the song ‘Cherish’. The album has four different concepts, including ‘Ka-CHING!’ And ‘Girl Problems’, which caused an explosive response from the audience.

In addition, Red Velvet, which debuted at ‘a-nation’ before, performed 4 songs including ‘Dumb Dumb’, ‘Russian Roulette’, ‘Rookie’ and ‘Red Flavor’. The excitement of the audience at the venue has been driven by the strong and sophisticated energy that  Red Velvet showed. There was also an announcement of the launching of ‘ReVeluv-Baby Party’, their first exclusive premium party to be held in Tokyo on November 6th.

In addition, NCT 127 was also onstage, with a total of four songs that showcased their great stage performances and incredible charisma from their debut tracks from ‘Fire Truck’, ‘Limitless’, ‘Good Thing’, to ‘Cherry Bomb’. Japanese fans seemed to be excited seeing NCT 127 even though they have not made a Japanese debut showing a good sign for the group in the future.