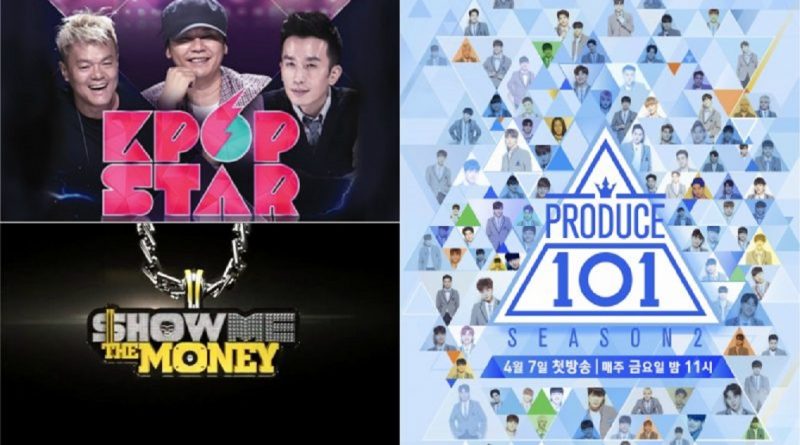 Produce 101 is a talent search event that is aired on Mnet. This event is a talent search event attended by 101 participants from various agencies in South Korea and relies on a voting system done by the ‘national producers’ to determine the winner. Produce 101 has 2 seasons. The 1st season, which was aired in early 2016, was attended by 101 female participants, and the 2nd season, which was aired since April 2017, was attended by 98 participants (3 participants resigned before the event). The event attracted huge attention both in Korea and abroad. The winners of the event are 11 people who will debut as a boyband or girlband. The winners of season 1 became a girl group named I.O.I, while the winners of season 2 will debut as a boy group named WANNAONE.

2. SHOW ME THE MONEY

This talent search show is quite different from other talent search events. Show Me the Money is a special talent search event for rappers. This show is aired by Mnet and already has 6 seasons. The first season started in 2012. The audition was not only held in Korea, but also USA. Lately, rap music has been very popular among Korean youth, thus this show becomes a very top event in South Korea itself. Lots of reliable rappers were born from this event, including idols such as B.I and Bobby from IKON, and Mino from Winner.

This talent search event is broadcasted on SBS. KPOP-STAR has a uniqueness as the judges were the CEO from South Korea’s 3 biggest agencies. In the beginning, the judges were from JYP, YG and SM. However, SM resigned some time later and was replaced by Antenna agency. The winners of KPOP-STAR will join one of these agencies. KPOP-STAR winners have proven themselves to become famous Korean stars, such as Park Jimin, Lee Ha Yi, Akdong Musician, and others.