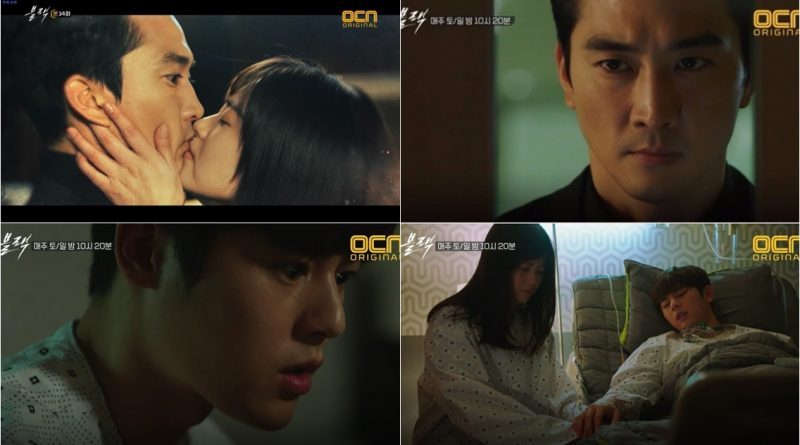 Kang Ha Ram found some sort of iron grating and took shelter with Oh Man Soo. Though they lost track of Wang Young Choon, inside the iron graple they only had to wait for dead time.” Looks like I’m gonna die, Do you see the shadow of death? That is not fair. I have not expressed my feelings. Kang Ha Ram, will you date me? Just until before I die. Be my lover before I die. I do not want to be single at the end of my life”, Oh Man Soo said.


At that time, Black came to save both, but Kang Ha Ram still treated him like Kim Joon, her first love. Han Moo Kang lied for her, she was more worried about Oh Man Soo who was almost dead. Black saw Kang Ha Ram behaving like that and felt jealous. Oh Man Soo reassured once more, “I really like Kang Ha Ram.”

In the midst of such a situation, the death of Oh Chun Soo was known by Kang Ha Ram. She felt more and more guilty that she cannot realize Oh Man Soo’s request to prevent Oh Chun Soo’s death. Black was drunk on his own and greeted Kang Ha Ram. At that moment, Oh Man Soo accidentally saw the video of Han Moo Kang through Tiffany.

Kang Ha Ram saw Han Moo Kang in the video, she heard Yoon So Wan’s (Lee El) explanation that Han Moo Kang did not cheat her, she realized her love for Han Moo Kang. Kang Ha Ram looked for Black to say farewell, “I think about it again, I like you not because of Joon. The one I love is you, Han Moo Kang”, Go Ah Ra confessed and kissed him.