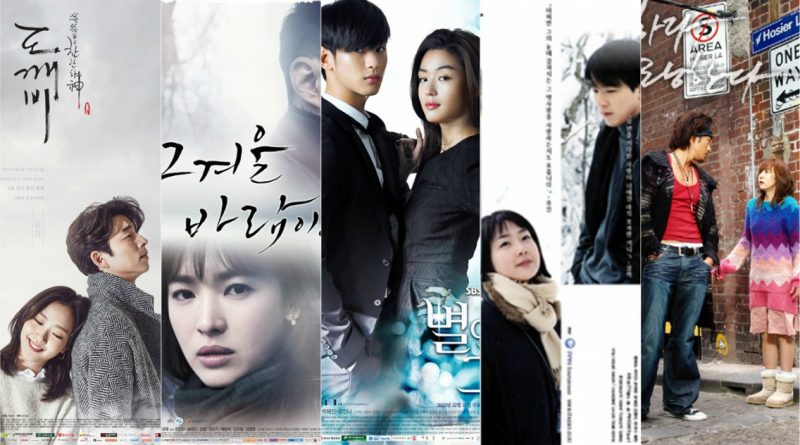 DRAMA KCORNER
December 18, 2017 Ria Goblin, K-DRAMA, My Love from the Star, Sorry I Love You, That Winter The Wind Blows, Winter Sonata

Viewers want to see a drama work that can compliment Christmas at the end of the year. What drama do viewers think of in winter?

TVN ‘Goblin’ drama which began airing earlier this year, there are many scenes of snow-backed scenes as it airs in the winter. Besides that, “The rain will fall. The first snow will fall. Let me ask this petition to God, “the phrase would automatically call Kim Shin (Gong Yoo) ‘Goblin’ during the first snow. OST Ailee ‘I Will Go To You Like The First Snow’ and Jung Joon Il ‘First Snow’, become a lau that automatically thinks when the first snow comes.

SBS’s drama ‘My Love From the Star’ caused syndrome in 2014 and becomes a must-watch drama in the winter. This is all because Do Min Joon (Kim Soo Hyun) and Cheon Song Yi (Jun Ji Hyun) enjoy kenja on a snowy road with beautiful scenery. The scene when Do Min Joon stops the time when kissing a woman, deeply shook the hearts of female viewers. The winter jacket worn by both became a hot topic among viewers.

KBS drama ‘Sorry, I Love You’ is better known for its OST sung by Park Hyo Shin ‘Snow Fower’ compared to the cast of So Ji Sub and Lim Soo Jung. This song is chosen as the best song to be heard in winter. Lee Kyoung Hee’s ‘Sorry, I Love You’ writer, “I’m going to eat and die with you” the sentence that So Ji Sub and Li Soo Jung’s dressing style became popular. This is the reason why the opinions at the end of the story become divided.