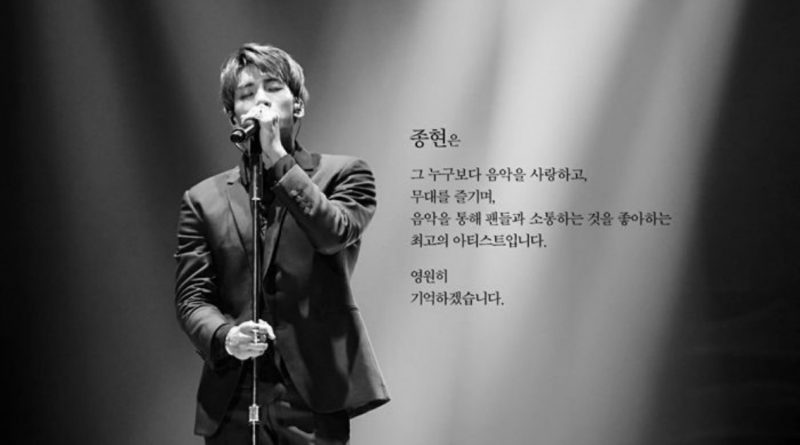 SHINee’s Jonghyun has left us all from this world. The funeral ceremony of the deceased Jonghyun was held at Asan Hospital’s funeral home on the 21st at 9 am. Amid the cold weather, the funeral ceremony was attended by relatives as well as members of SHINee Minho, Key, Taemin, Onew, and a number of other SM Entertainment parties.

At the venue, a number of reporters, local and overseas fans gathered to send away the deceased for the last time. When the corpse was taken out, a number of people presented at the scene seemed unable to hide their sadness. The older sister brought a photo of her brother Jonghyun, while Minho took the deceased with a sad expression. Super Junior members Lee Teuk, Dong Hae, and Eun Hyuk also helped the funeral process.

The family was filled with sadness and tears, and many fans shed tears after the hearse departed. Earlier at 8 pm, a closed funeral ceremony was conducted in the 1st floor burial hall. Attended by family, relatives from SM Entertainment, and several close acquaintances. “The funeral was really private and done according to Christian custom,” said SM Entertainment. Sang Joo (the leader of the funeral service), his father raised his name.

Jonghyun was found unconscious at 6.10 pm on Cheongdam-dong in Seoul, police and 119 had provided CPR assistance and brought him to the nearest hospital but eventually he could not be saved. It makes many people sulky and sad when he was only 27 years old.

August 28, 2017 Ria Comments Off on Hyuna Makes A Comeback This Summer!
MOVIE VIDEO