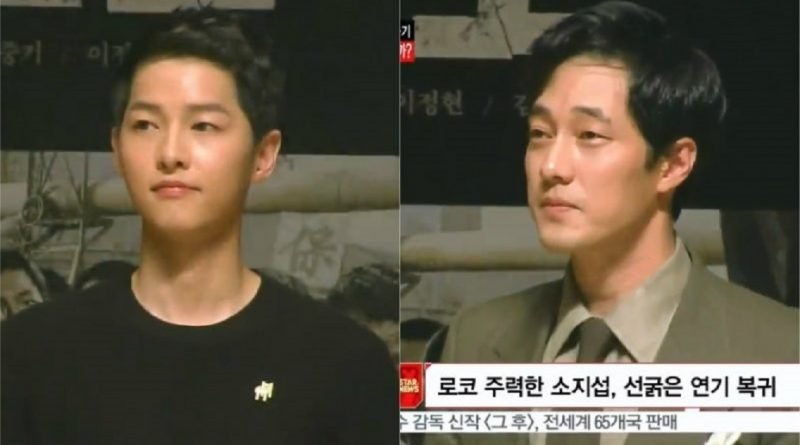 Song Joong Ki is expected to repeat his success with this new movie, in which he’ll portray a soldier character once more. ‘Battleship Island’ is based on a true story of events that happened during the Japanese colonialism period. “I play ‘Park Moo Young’, an OSS special agent. My character in charge of expelling the Joseon (Korea) people from the war ship,” said the actor about his character. “The biggest difference between Park Moo Young and Yoo Shi Jin is Park Mo Young is only a first lieutenant.”

So Ji Sub, who lately always appear in romantic-comedy dramas, also attracts attention with his character in ‘Battleship Island’. “People in my age are usually known to be quiet and curt. Public have seen me as a cheerful character in a romantic-comedy drama numerous times… so I thought, portraying a completely different character will be fun.” So Ji Sub and Song Joong Ki’s presence in ‘Battleship Island’ has of course increased female fans’ expectation toward the film.

One of their co-stars, Lee Jung Hyun, praised So Ji Sub and Song Joong Ki. “Senior So Ji Sub is an expert in action scenes. He always takes care of the blocking, positioning, so that no one gets hurt. Meanwhile, Song Joong Ki often came and gave support to other cast members when we were doing a difficult scene.”

Song Joong Ki seems to be very optimistic about this movie. “I believe the audience will give a good rating, because we, ourselves, are very satisfied with our hard work.”