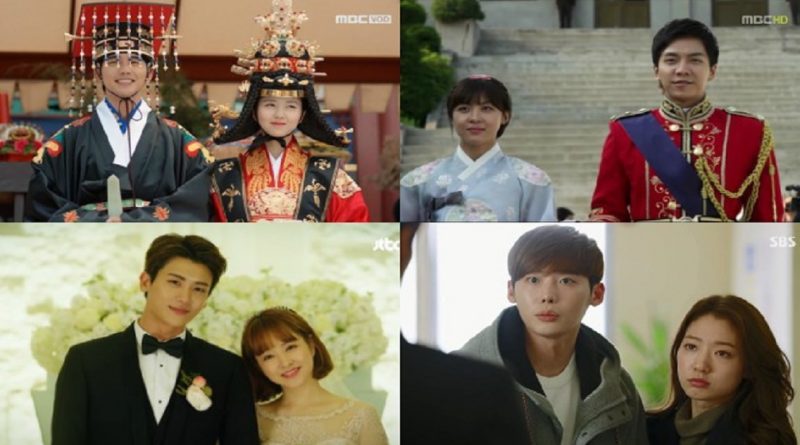 After the tough competition to get the throne by the two very tough kings, the marriage between Lee Sun (Yoo Seung Ho) and Han Ga Eun (Kim So Hyun) the woman he loves is the moment that becomes the happiest. Knowing the fact that the drama production team ‘Ruler: Master of the Mask’ is not half-hearted in showing the wedding scene between the two. Their marriage was really like a royal wedding in Joseon’s time. Greeted loudly by the people and surrounded by the royal army, this marriage looks very festive. Plus the traditional Korean costumes worn by Yoo Seung Ho and Kim So Hyun showcase the simplicity and values of Korean customs.

Unlike the marriages of Yoo Seung Ho and Kim So Hyun in the drama ‘Ruler’, the wedding of King Lee Jae Ha (Lee Seung Gi) and Captain Kim Hang Ah (Ha Ji Won) is a royal wedding in a more modern era. Beginning with the complicated conflict between South Korea and North Korea that makes it difficult for them to get married, marriage between South Korea and North Korea is finally becoming real as well. This moment is really just like a royal wedding. Accompanied by royal soldiers behind him King Lee Jae Ha (Lee Seung Gi) dressed in a red King costume. Meanwhile, Captain Kim Hang Ah continues to display the simplicity of North Korea with soft-colored hanbok. This moment must be very memorable in the memory of viewers.

Various sad stories which surround the couple Choi Dal Po (Lee Jong Suk) and Choi In Ha (Park Shin Hye). Since they were still a kid, they have lived together and love bloomed between them and both worked together to reveal the ugliness of Song Cha Ok (Jin Kyung) who has slandered Choi Dal Po’s father (Lee Jong Suk) and reported the false news. Once their objectives are achieved, they held a beautiful marriage and end with a kiss that is sure to be memorable and unforgettable to the viewers.

Of the four wedding scenes, which one is the most memorable in your opinion? Do you want them to have a real marriage in the real world?

July 5, 2017 Ria Comments Off on BTS is Crowned as ’25 Most Influential People On the Internet’ by Time Magazine
STAR VIDEO