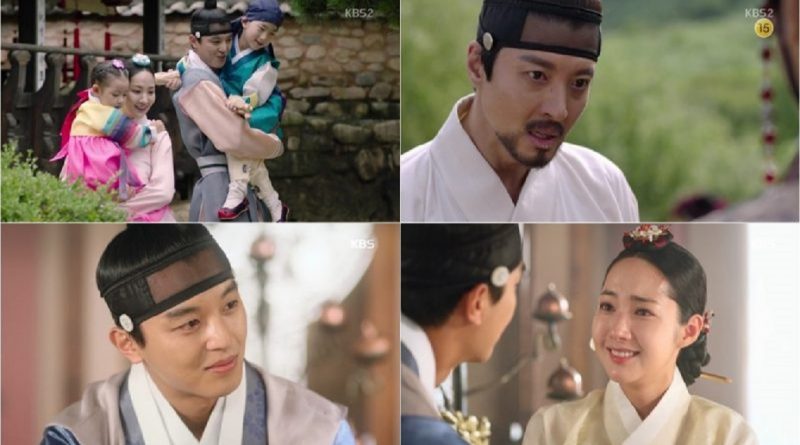 The episode started with Shin Chae Kyung, who was about to be hanged in public after getting accused of helping Yoong, the previous King, escape from exile. The date of Shin Chae Kyung’s punishment was moved per the Queen Mother’s order; luckily, Yeok heard of it and instantly ran off to where Chae Kyung was. He helped his wife getting off the stool, and right after, Chae Kyung lost her consciousness in Yeok’s arms.

However, a few days later, Chae Kyung finally mustered up the courage to say goodbye to Yeok. She cut of a ribbon from her Queen robe, meaning that she asked for a divorce. Despite Yeok’s protest, Chae Kyung insisted that they have to live separately in order to save each other’s lives. Chae Kyung made Yeok promise that he would stay alive as long as he could, as it was the only way Yeok could prove his love for Chae Kyung, who only wanted him to be alive and happy as a King.

On the other hand, Park Won Jong, the minister who was greedy with his ambition to dethrone Chae Kyung from her title as Queen, was stripped from his position after his corruption was revealed to public by the Snail Wives.

In exile, Lee Yoong kept worrying about Chae Kyung’s whereabouts. He spent his days reading Shin Su Geun’s letters, and wrote a written statement to the palace that Chae Kyung did not help him escape. Days passed, and his condition was getting worse. On the day where Yeok visited Yoong in his exile, Yoong finally said that he did not hate Yeok, then passed away in the arms of his brother.

Several years into his reign, Yeok offered Chae Kyung to be reinstated, but Chae Kyung declined the offer as Yeok already had a son by then. Chae Kyung did not want their son to have a competition with Yeok’s first son, just like what Yeok and Yoong had back in the days. Thirty eight years later, upon receiving the news that Yeok’s health was deteriorating, Chae Kyung finally came to the palace. After a long time, the two of them were finally reunited. “Have you been waiting for long?” asked Chae Kyung. “No. I knew that you’d be here eventually. That’s why I could go on with my life,”

In the end, old Yeok leaned his head on Chae Kyung’s thighs, closed his eyes, and took his last breath that way. “I am finally home,” said Yeok in his heart.