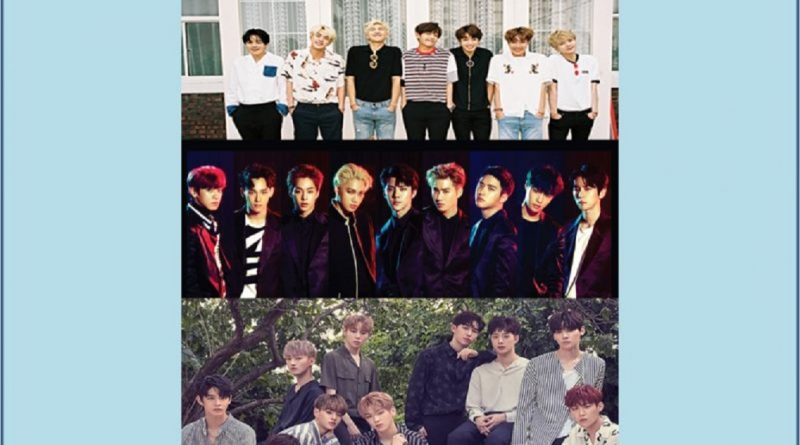 BTS is a group of 7 people from Big Hit Entertainment. They debuted on June 13, 2013 and have released various hits such as ‘Blood, Sweet & Tears’, ‘Spring Day’, ‘Fire’, ‘Dope’, and more. It can even be said that the songs they released always become hits inside and outside the country. BTS has also successfully earned many awards for their success in album sales. Not long ago, BTS won the ‘Teen Choice Awards 2017’ American award for the category ‘Best Choice International Artist’. The members of this group are Rap Monster, V, Jimin, Suga, J-Hope, Jungkook, and Jin.

EXO is a boy band under SM Entertainment. This 9-membered group debuted in 2012 originally with 12 members. EXO produces easy-listening hits like ‘Growl’, ‘History’, ‘Call Me Baby’, ‘Overdose’, and more. The fourth album of EXO ‘Kokobop’ which has just been released in July, is sold more than 41,600 copies in just a day and this earned them the status of ‘Quadruple Million Seller’ for selling over 1 million album copies. The members included in this group are Suho, D.O, Chen, Xiumin, Baekhyun, Kai, Sehun, Lay, and Chanyeol.

Wanna One is an 11-membered male group formed based on Mnet’s ‘Produce 101’ survival program. They were the 11 participants who got the most votes from the audience. Although Wanna One is a rookie group that has just debuted this year, they have shown their popularity by successfully ranking 1st on the online music charts for their debut song, Energetic. Members of this group are Kang Daniel, Park Ji Hoon, Lee Dae Hwi, Kim Jae Hwan, Ong Seong Woo, Park Woo Jin, Lai Kuan Lin, Yoon Ji Sung, Hwang Min Hyun, Bae Jin Young, and Ha Sung Woon.