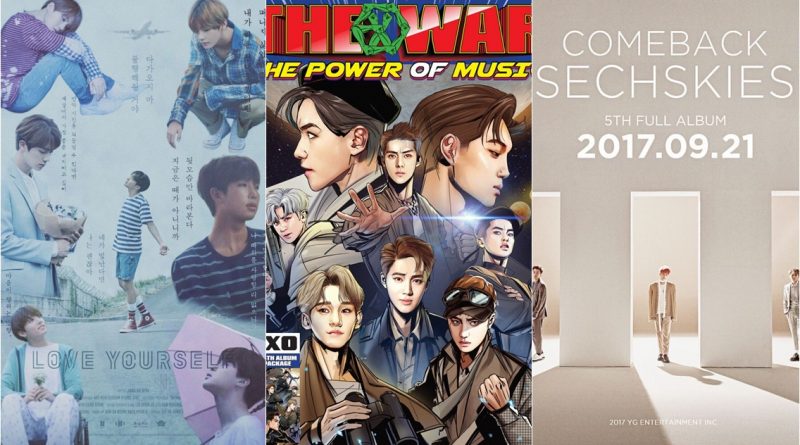 Starting from BTS, EXO, to Sechs Kies, famous boy groups will return to the music industry in September. Sechs Kies is reported to have a comeback. The agency YG Entertainment on 4th released the teaser with the words ‘COMEBACK SECHSKIES 5th FULL ALBUM 2017.09.21’ through its official web at 2 pm. In the released photo, Sechs Kies wears a semi formal dress and features a unique atmosphere with various poses.

On the 18th, BTS confirmed the release of the mini album ‘LOVE YOURSELF 承’ Her ”. BTS returned to the music industry lapse 7 months after ‘Wings: You Never Walk Alone’ released last February. This year, BTS has 32 concerts in 17 countries. They also became a topic of conversation after becoming the first K-POP group to win the US Billboard Music Award.

On the 5th, EXO made a comeback with new song ‘The Power’ from fourth repackage album ‘THE WAR: The Power of Music’. Before the comeback, EXO was predicted to be a global group since its debut. Video teasers with various hints, such as ‘Total Eclipse’ and ‘Parallel Universe’, are increasingly intrigued by the appearance of visual members.

The comeback of Sechs Kies, BTS, and EXO in September is such an exciting news for the music industry . The music industry has been heating up with a comeback group with big fandom and great power, and their great musicality continues to be anticipated.