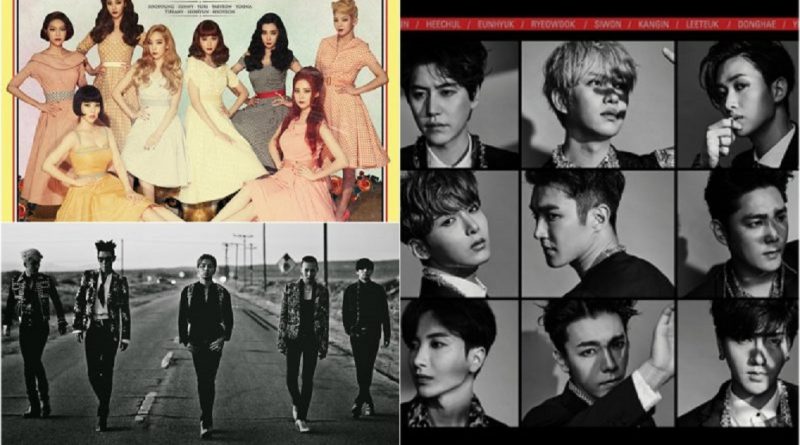 Big Bang is a South Korean idol group formed by YG Entertainment. The group officially debuted on August 19, 2006 with five members: G-Dragon, T.O.P, Taeyang, Daesung and Seungri. Bigbang has a unique hip hop stream, so their debut was quite successful with their first album, Bigbang Vol.1, sold as many as 48,000 copies. Their success sped after the release of their first mini album, Always, with its single ‘Lies’. Big Bang called their fans ‘VIP’. It’s been 11 years since they have became a group that successfully brought K-POP to the international world. Although Bigbang can be regarded as one of the most successful idol group to date, they are also often involved in some controversies. Among them are love scandals, car accidents due to DUI, and the latest is T.O.P’s marijuana abuse scandal.

Girls’ Generation was formed in 2007 under S.M. Entertainment. The group consisted of nine members: Taeyeon, Jessica, Sunny, Tiffany, Hyoyeon, Yuri, Sooyoung, Yoona, and Seohyun. Girls’ Generation debuted with ‘Into the New World’ and ‘Kissing You’, both of which have made Girls Generation public. In 2009, they gained significant popularity through the single “Gee”, later named as Song of the Decade in South Korea. In 2014, S.M. Entertainment officially announced that Jessica will not be active anymore in Girls’ Generation. With only 8 members left now, Girl’s Generation still managed to show their popularity. Girl’s Generation is also reported to make a comeback this month to celebrate their 10th Anniversary

Super Junior is the most phenomenal Korean male idol group. Formed in 2005 and produced by Lee Soo Man from record company S.M. Entertainment, this group consisted of thirteen members. Early on, Super Junior has only twelve members, consisting of Leeteuk, Heechul, Han Geng, Yesung, Kangin, Shindong, Sungmin, Eunhyuk, Siwon, Donghae, Ryeowook and Kibum. In 2006, Kyuhyun joined Super Junior. Super Junior then released the single ‘Sorry, Sorry’ which raised the name of this group. But this group has been abandoned by two members, Han Geng and Kibum. Super Junior had a hard time when many of his members were in the army, but this year, Super Junior is planning a comeback to greet their fans again.

August 2, 2017 Tirta Comments Off on The Rise of Idol Actresses in Korean Dramas