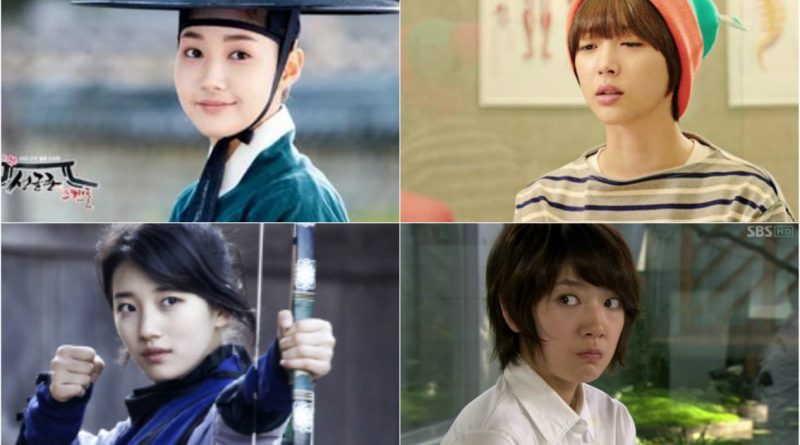 Some of the female characters who pretend to be a man can be seen in some Korean dramas. Although disguised as a man, these actresses still look beautiful like a woman. Who are they?

Suzy in the drama ‘Gu Family Book’ acts as Yeo Wool Dam. Dam Yeo Wool is a renowned martial art teacher. He is good at using arrows and her sword. For the sake of self-security that is often in danger, she disguises herself as a man. Although acting as a man, Suzy’s beauty playing as Dam Yeo Wool still radiated.

Park Min Young had transformed into a man in the drama ‘Sungkyunkwan Scandal’. She pretends to be Kim Yoon Hee who is disguised Kim Yoon Shik’s brother. Kim Yoon Hee must be disguised so that she can learn and be as smart as the men in her area. The gentle and charming smile of Park Min Young still hints at her as a beautiful woman.

Maybe some of you still remember that Park Shin Hye once showed off her acting skills in the drama ‘You’re Beautiful’. Park Shin Hye acts as Go Mi Nyeo disguised as Go Mi Nam, her twin brother who is undergoing treatment in the US. Park Shin Hye looks a perfect fit with short haircuts with bangs and many who still admire her beauty despite her role as a man.

Sulli became one of the beautiful female characters for playing a role in the drama ‘To The Beautiful You’ as Go Jae Hee. Although disguised as a man, the woman who becomes the visual of group F (X) still show the charm of the visual of a girl group member.

Of the 5 transformations of the woman – which character do you think still have the shining beauty?

April 17, 2017 Tri Comments Off on Tak Jae Hoon Becomes the MC of K STAR ‘I Am the Actor’
MOVIE VIDEO

April 4, 2017 Tri Comments Off on The Stars Show Their Support to ‘One Step’ Movie