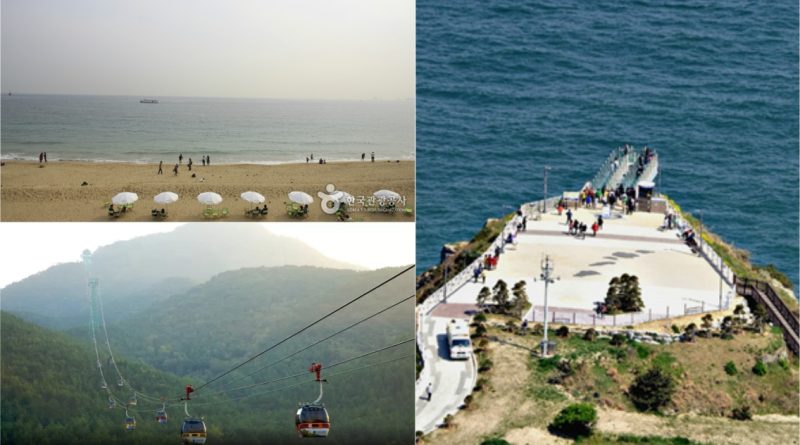 Busan became one of the most famous cities in South Korea. A lot of Korean stars were born in this city, in addition, the dialect of this city is very famous among Korean lovers. One of the dramas that use the Busan dialect is the drama 1988 Reply. In addition, Busan also has tourist attractions that must be visited by tourists during a visit to Korea. Here are 3 places to visit in Busan.

The construction of Oryukdo Skywalk finished on September 12, 2012 in Seungdumal area, which is seen as a dividing point between the East Sea and the South Sea, and commenced operations on 18 October 2013, with the theme ‘Walking above the sky’. The iron bar was built on a cliff 35 feet tall, and a 15-meter glass bridge consisting of 24 layers of glass and shaped like a horse’s hooves connecting iron poles. The bottom of the glass is specially made with a combined four-piece glass of 12 millimeters thick layered a bulletproof film with a thickness of 55.49 millimeters, making the arrangement quite safe. Visitors will be shaken with wave scenes as they look down through the transparent floor. The ocean stretches across the skywalk, perfect for shooting, and also the best place to see Daemado Island on a sunny day.

For a 360 degree view of South Korea’s beautiful south coast, head to Tongyeong. There is the Hallyeo Waterway Observatory Hanging that takes visitors to the top of Mount Mireuksan. Enjoy the panoramic panorama of Busan’s coastline and islands. This cable car is inside the Hallyeo-haesang National Park, which encompasses a wide range of coastal areas, islands and oceans on the southeastern coast of South Korea. More than a million tourists ride this cable car every year. Each carriage carriage has its own name and can carry eight passengers. During the summer, high number of visitors may require you to share your car with other visitors, depending on the size of your group.

No need to ask why this place is a favorite of many tourists. In addition to the beauty of the beach and can do water sports, here also there is a bottom aquarium. Haeundae Beach is the largest beach in Korea with the highest number of foreign tourists visiting. ‘Haeundae’ in Korean means “Sea and Cloud” this name was given by a scholar Choi Chi-Won of the Silla Dynasty. Undoubtedly, chingudeul will be fascinated by dramatic ocean views with its fine white sandy beaches. Here also a lot of water sports or games provided so as to add a more exciting chingudeul holiday. Haeundae Beach is visited during the summer (June-August). Many cultural events and festivals are held on this beautiful beach throughout the year to attract foreign tourists.