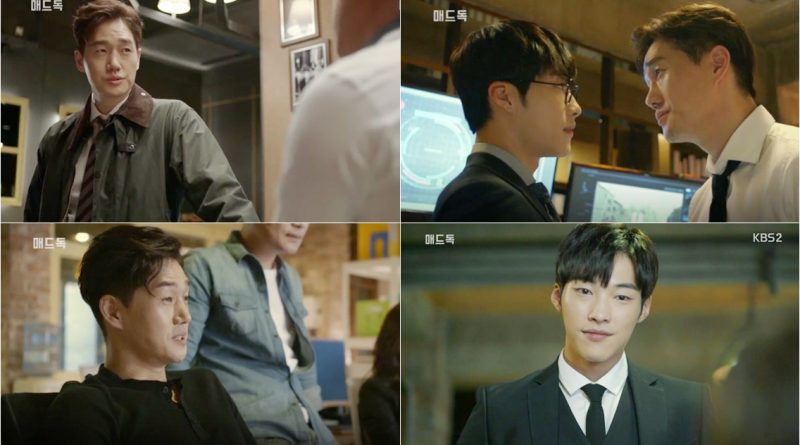 KBS 2TV’s new Wednesday-Thursday drama ‘Mad Dog’ which premiered on the 11th, has received a warm response. The first episode was extraordinary and made viewers spend their time watching to the end.

On the airing of the day, ‘Mad Dog’ as a team of investigators dealing with insurance fraud began their investigation into the problem of the collapsed architecture building of Ahn Chi Hun. Kim Min Joon (Woo Do Hwan) appeared in the middle of Choi Kang Woo (Yoo Ji Tae) and ‘Mad Dog’ who suspected of insurance cheating and tried to reveal the truth.

Kim Min Joon who came to the ‘Mad Dog’ office provoked Choi Kang Woo and bet on the cause of the building collapse, if he won, he would ask for ‘Mad Dog’. Meanwhile, ‘Mad Dog’ discovered similar Ahn Ci Hun’s insurance problem in the past and supported it with the evidence they found on the field, but Kim Min Joon has broken Mad Dog’s logic and evidence by an experiment.

As Kim Min Joon expressed, the cause of the collapse of the building is not its construction but resonance. Finally, Ahn Chi Hun claimed billions of insurance claims for life. But the unexpected event has just begun. Kim Min Joon approached Ahn Chi Hoon to dig into more in-depth information, and he wanted to prove the construction is not the reason for the collapse of the building.

When he discovered the cause of the building collapse, according to his promise, Ahn Chi Hun paid insurance to the victims fairly. Kim Min Joon appeared in front of Choi Kang Woo and Mad Dog. Kim Min Joon kept his promise asked Mad Dog to work together and made the plot even more exciting.

The actor’s performance that increased interest in the insurance crime investigation drama that was rarely discussed, received a warm response. Yoo Ji Tae who plays the chair of ‘Mad Dog’ named Choi Kang Woo has a strong charisma and a questioning smile. He focuses on giving different character and acting from his previous dramas.

Woo Do Hwan who plays a mysterious man named Kim Min Joon, becomes the center of attention in the midst of battle and movement with different acting. The movement of the two men in the future is highly anticipated.