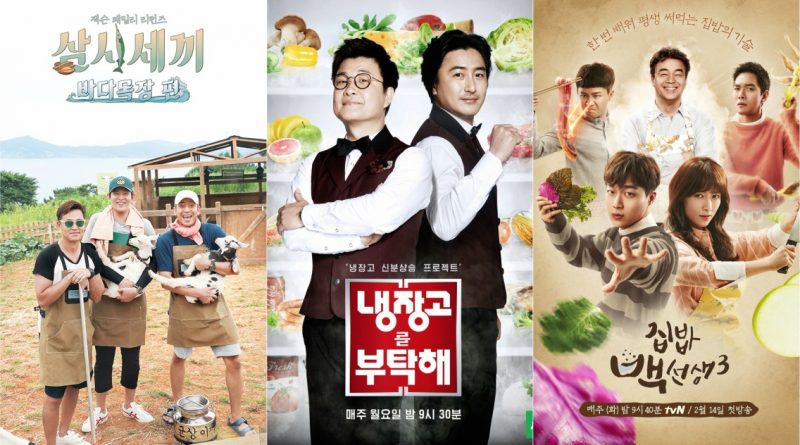 ‘Mr. Baek Homemade Food Master’ or also known as ‘Home Food Rescue’ is a program led by Baek Jong Won, a famous chef in Korea. The theme of this show is Baek Jong Won teaches some artists who cannot cook. In this show, he teaches how to make food that can be made easily and can be enjoyed at home. The show airs on tvN, and has now reached the third series. In the third series, the artists who took part in the show are Yang Se Hyung, Lee Kyu Han, Nam Sang Mi, and Yoon Doo Joon. This third series aired since February 2017. In this third series Baek Jong Won said, “I want to show the viewers a good, healthy food and can be consumed well with these new members. We’ll show you home-cooked recipes with ease.”

‘Three Meals A Day’ is an show that airs on tvN since October 17, 2014. Now this show has had 4 series. Members of the show are Lee Seo Jin, Eric Moon and Yoon Kyun Sang, who are also members in the third series. ‘Three Meals A Day’ gets a very good response in Korea. They managed to get a 6% rating for the first series, it is a very big achievement considering the show is aired on a private television station where 1% is already a high rating. ‘Three Meals A Day’ even managed to win the grand prize and best content award for the variety category in ‘tvN10 Awards’ in 2016.

3. Please Take Care of My Refrigerator

‘Please Take Care of My Refrigerator’ is a JTBC television program starring many famous chefs and guest stars in Korea. The show began airing on November 17, 2014. At first the show was performed by Kim Sung Joo and Jung Hyung Don, but after Jung Hyung Don decided to take a break from the Korean television scene, he was replaced by Ahn Jung Hwan. In every episode, the refrigerator from the guest stars was brought into the studio. Later the chefs must fight in making dishes that come from the contents of the guest star’s refrigerator. The program has now reached 153th episode.