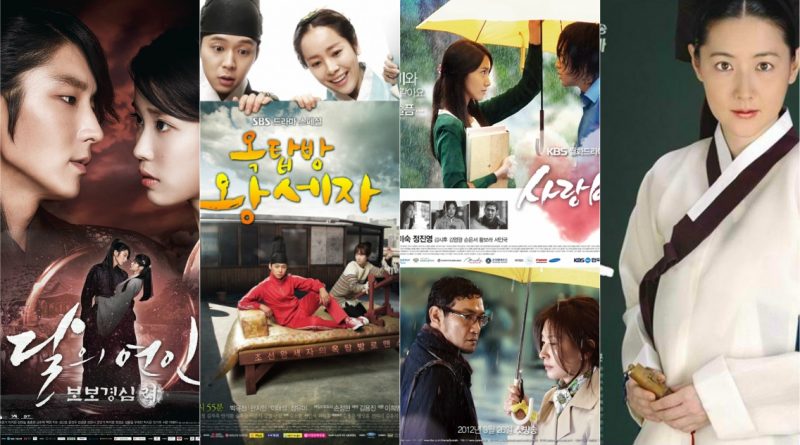 SBS drama ‘Moon Lovers: Scarlet Heart Ryeo’ is played by Wang So, Lee Hae Soo, Wang Wook, and others. In the drama series ‘Moon Lovers: Scarlet Heart Ryeo’ is about an Imperial heir named Wang So who does not reveal himself when in public and does not like the spotlight too much. Wang So is a figure of a man born with a cold personality but he still has a high royalty. He hides his face beneath the mask and is dubbed a ‘dog wolf’ by others and makes others frightened when he sees it. Meanwhile there is a woman named Ko Ha Jin who had time travel back to the Goryeo Dynasty, she woke up in Hae Soo’s body. She tried to adapt to the new environment. Love, competition, politics, and friendship that arose between handsome prince and a woman turned into seizing the throne and finding love.

SBS drama ‘Rooftop Prince’ is played by Lee Gak (Park Yoochun), Hwa Yong (Jung Yoo Mi), Park Ha (Han Ji Min), Yong Tae Moo (Lee Tae Sung), and others. This drama is about the Crown Prince in the Joseon era, Lee Gak, who is investigating the death of his wife, Hwa Yong). But suddenly Lee Gak experienced an amazing thing that made him stranded to 300 years to come precisely in the 21st century. When Crown Prince Lee Gak traveled 300 years into the future with his three followers. They believe that it is their duty to solve the murder case of the Crown Princess. Lee Gak suddenly stranded in Seoul 2012, in the apartment of a girl named Park Ha (Ha Ji Min). Park Ha is a cheerful woman of about 20 years. Unexpectedly Park Ha has a face very similar to the prince’s wife. Wearing Yong Tae Yong’s identity, Lee Gak slowly starts uncovering his wife’s murder and closer to solving his wife’s murder case. But he began to fall in love with Park Ha.Ternyata in 2012 there is a reincarnation of Lee Gak, Hwa Yong, and his sister, Bu Yong (Ha Ji Min). While investigating what happened, Lee Gak and Park Ha are in love.

KBS drama ‘Love Rain’ has stories from two generations. In 1970, In Ha (Jang Geun Suk), art students have friends named Dong Wook (Kim Shi Hoo), and Chang Mo (Seo In Guk). All three are popular figures. One day Dong Wook and In Ha like the same woman named Yoon Hee (Yoona). Knowing that his close friend Dong Wook also loved him, In Ha decided to resign. Later in the present, Joon (Jang Geun Suk) meets Ha Na (Yoona) by accident at Hokkaido station, Japan. The first meeting of both of these can be said as meet the enemy. They always fight every time they meet. But when he arrived in Korea, Ha Na and Joon were reunited with a different situation. Because Ha Na needs work and shelter, she is forced to work as a gardener in Joon’s studio and live there. The longer the two become closer and the relationship develops. Then Ha Na learns that Joon is the son of In Ha, his mother’s first love. Ha Na and Joon are in crisis, whether they should defend their love or let their parents unite.

MBC drama ‘Jewel in The Palace’ is a drama played by Lee Young Ae and Ji Jin Hee. The drama premiered in 2003 on MBC with a total of 54 episodes. ‘Jewel In The Palace’ set about 500 years ago during the Joseon Dynasty, which tells of a woman named Seo Jang Geum (Lee Young Ae), who is part of the lower classes in the community. Nevertheless, she managed to overcome a series of social discrimination and become a royal chef. Eventually she became a royal physician and became a physician in charge of the King. The drama is based on a true story about a girl named Jang-Geum, the first woman who became the highest royal physician of her time.