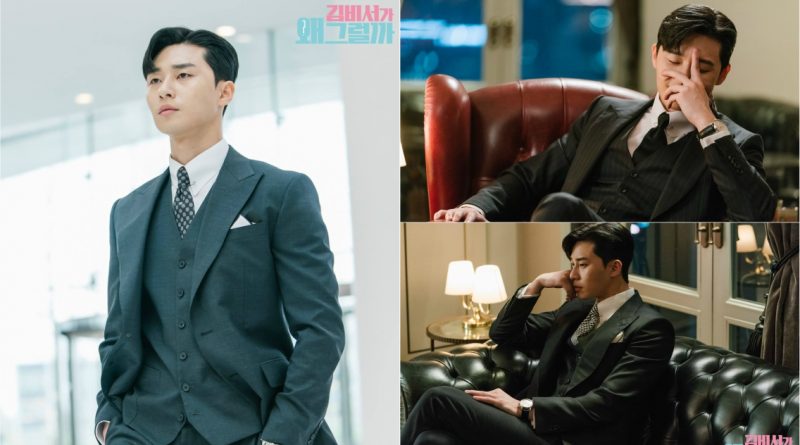 Park Seo Joon has turned himself into a Chairman with narcissistic.

Lee young Joon is a rich, powerful and a perfect-looking chairman of some company in the drama ‘Why Secretary Kim?’ that is set to air later this June.

The production team of ‘Why Secretary Kim?’ drama released a still cuts of Park Seo Joon’s first shooting in 24th of April.

Park Seo Joon has turned into a narcissist named Lee Young Joon who is full of deadly charms. In the pictures, he looked completely in deep thought and he rests his finger on his forehead that made the viewer curious on what he’s up to. His dazzling and perfect appearances successfully captured the viewers attention.

The production team said that Park Seo Joon is doing very well on getting into his character. He also often exchanging opinion and thoughts with PD Park Jun Hwa to create the perfect character of Lee Young Joon. Furthermore, he also did the deep talk with PD Park Jun Hwa and make him feel as if he is a the one who play the role of Lee Young Joon. It is also said that the women staff gave him a thumbs up for his his handsomeness and his dazzling appearances.

Team productions are also surprised after seeing how Park Seo Joon perfectly turned himself into a narcissist that bring life into the character Lee Young Joon in his first day of shooting. “We hope that the viewers would wait and support this drama and watch Park Seo Joon’s acting ability in this drama” said one of the production staff.