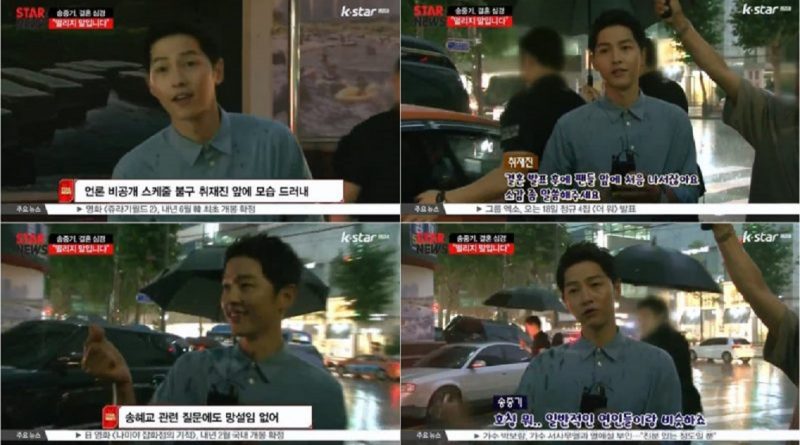 Song Joong Ki first appeared in front of the camera after announcing his marriage plan with Song Hye Kyo. Two days after the marriage announcement, on July 7, he attended the ‘Battleship Island’ promotional campaign held in the cinema.

Although the show was not open to the public, Song Joong Ki appeared in front of the camera for the reporters waiting for him. Song Joong Ki admitted that he was very nervous about dealing with the public after the news of his marriage.

Song Joong Ki conducted a long interview despite the rain, he answered all of the reporter’s questions patiently. According to Song Joong Ki, Song Hye Kyo gave her a message when he was going to the film promotion, “‘Don’t be nervous and do your best. Today is your movie promotion schedule after a long while’ Hye Kyo told me not to be nervous and to give my best”, Song Joong Ki said.

“Just like other couples, sometimes I call her ‘dear'”, Song Joong Ki said when he was asked about his nickname for Song Hye Kyo.

He answered questions about Song Hye Kyo’s kindness without hesitation. “Many people already know, she is a calm and friendly person. She has a deep personality. She also gives a good influence and she is a senior to me. That’s why she teaches many things and gives a lot of energy”, said Song Joong Ki.

Song Joong Ki intends to hold an official interview or a press conference on the news of his marriage. He also does not forget to give his thanks to the fans who have blessed him with love and care.