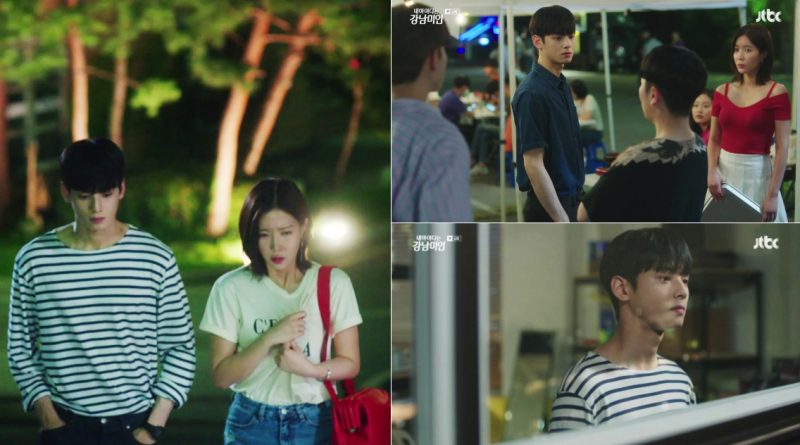 Kang Mi Rae (Im Soo Hyang) and Kyung Suk (Cha Eun Woo) has solved their misunderstanding in the past as they revealed their scars and inner feelings to each other in the 6th inning of JTBC drama ‘My ID is Gangnam Beauty’ that mad ethe viewers is now waiting for the love story between the two couple who are trapped in the misunderstanding of their past.

After entering the college, Mi Rae met her middle school classmate and started to feel an unusual fear of being exposed of her past. She was scared that her friends would’ve recognized her face even after the plastic surgery as she remembered Do Kyung Suk who was laughing at her and called her ugly. But after they solved the misunderstanding between the two of them, Kang Kyung Suk admitted to Mi Rae “I never care about appearances actually” he said, explaining the misunderstanding between them.

Meanwhile, Mi Rae reminisced a memory of a girl who were dancing alone in the bus stop and Kyung Suk who was misunderstood Mi Rae back then in their middle school said “You were laughing at me” and the memories made her smiled.

Mi Rae also captured Kyung Suk’s attention through the scent of her that smells exactly like his mother in the past which he revealed that he is a victim of a family affairs that caused his family to separate.

The fifth and the sixth innings of this drama has showed the lovely side of Kang Mi Rae and the heart-racing moment between her and Do Kyung Suk that kept the viewers entertained last Friday and Saturday night. The two of them were very lovely, especially when Kyung Suk showed a small affection such as showing his rage secretly when he was jealous.

Kyung Suk and Mi Rae were often getting involved got trapped in a room during their festival night and it makes the viewers expected that their love story will begin soon.

‘My ID is Gangnam Beauty’ airs every Friday and Saturday at 11pm local time.