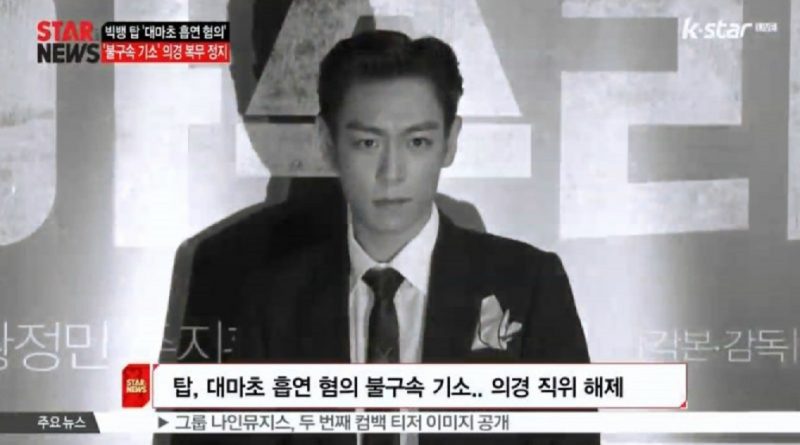 Big Bang’s TOP, who has been serving military service as an active police officer since last February, is involved in marijuana use scandal. TOP admitted to have consumed marijuana four times in October 2016 with a female trainee after denying it at first.

As the result, Seoul Police Department declared TOP to be indicted without arrest. TOP has officially been expelled from his military service at Gangnam Police Station. On the afternoon of June 5th, TOP was seen exiting his dorm wearing a police uniform and holding a bag, avoiding the journalists and quickly entering a vehicle that had been waiting for him. Despite his unintelligible smile, his gaze showed anxiety and exhaustion. He is currently waiting for the Seoul Police Department’s decision regarding his trial.

The next morning, public was shocked with another breaking news that TOP was rushed to Ewha Women University Hospital’s emergency unit on June 6th after consuming too much antidepressants, which made him lost consciousness. It is also known that TOP’s family has come to accompany him that evening. Meanwhile, reports regarding TOP’s condition creates confusion for netizens, because the police said that TOP is conscious and already undergoing recovery process, while TOP’s family dismissed it and stated that TOP’s condition is still critical.

We hope TOP can recover quickly and back in a healthy state!