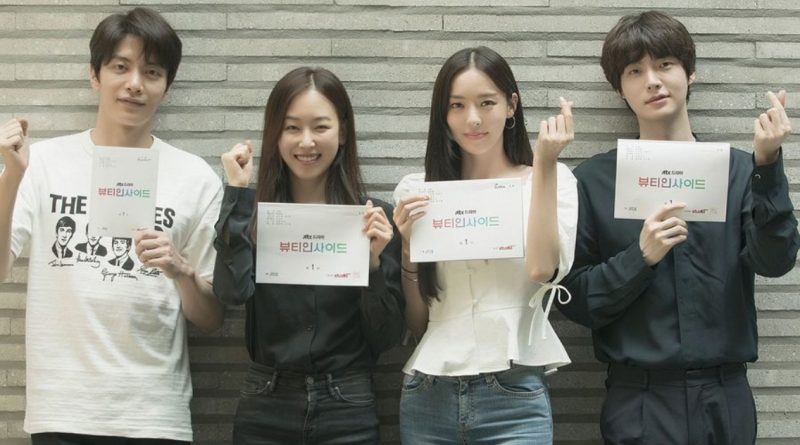 The drama ‘The Beauty Inside’ has made the viewers excited since the first announcement of its main leads.

The new JTBC drama ‘The Beauty Inside’ that will replace ‘Life’ has gained an expectation form the viewers through the first meeting of the main leads and the production team of this new drama.

‘The Beauty Inside’ is a romantic comedy drama that tells a special love story of a woman who has to live with another people’s face for a week and a man who can’t recognize other people’s face. After their first meeting, Seo Hyun Jin and Lee Min Ki has showed their perfect chemistry, Lee Da Hee and Ahn Jae Hyun also showed each of their charms that radiates the atmosphere that they’re well-prepared for this drama.

Seo Hyun Jin was seen focused as she gets into her character as Han Se Kye. She will transform into a woman who has to live with another people’s face for a week once in a month and she is expected to show an unique acting skill. Lee Min Ki is the main male lead named Seo Do Jae, a man who looks perfect both appearance and skill but apparently he has weakness which he can’t recognize other people’s face. Lee Min Ki in the reading site was seen melted into his character, Seo Do Jae that rise the expectation of everyone for this drama. Especially the perfect synergy between Seo Hyun Jin and Lee Min Ki is enough to make the viewers curious on how the first meeting of Se Kye and Do Jae will be unfold.

Lee Da Hee played the role of Seo Do Jae’s sister, a character which is beautiful yet arrogant at the same time and she was seen ready to play her character in the script-reading site. Ahn Jae Hyun will play his character named Ryu Eun Ho who has gained a lot of expectation from the viewers through his cold image and his perfect harmony. His innocent charms but cold towards the love relationship is expect to be the beginning of the tug of war in this drama.

June 13, 2017 Tirta Comments Off on TOP Has Been Discharged from the Hospital
DRAMA VIDEO