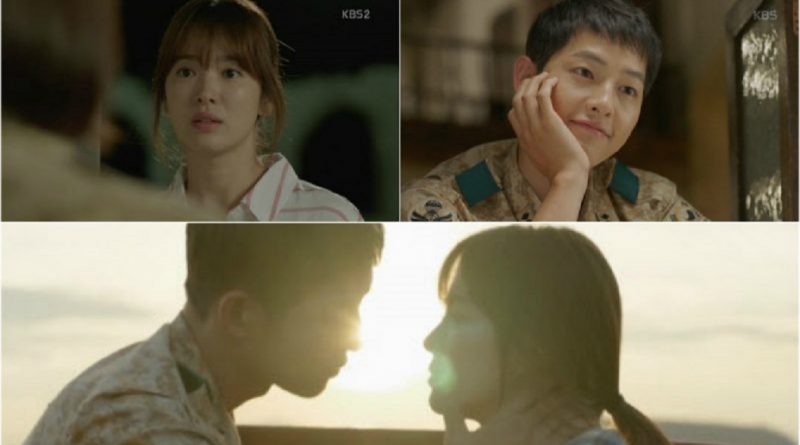 Previously, Kang Mo Yeon (Song Hye Kyo) was embarrassed because her recording got accidentally played for the whole barracks to hear. The recording, which was taken during the time when Kang Mo Yeon almost died due to a car accident on the edge of a cliff, indirectly expressed her feelings toward Shi Jin. Hearing it from the speaker, the doctor got panic and ran quickly to pull out her phone from the player.

Shi Jin tried to catch Mo Yeon to ask for her explanation. Mo Yeon, who was still deeply embarrassed, opt to ran away from him.

After the incident, Mo Yeon kept avoding the soldiers. When she was hiding, Myeong Joo caught a hold of her. Mo Yeon asked whether it was okay for Myeong Joo to have a soldier as her boyfriend. It seemed like Mo Yeon was trying to make sure of her own feelings and relationship with Shi Jin.

After meeting Mo Yeon, Myeong Joo also met Shi Jin, who was sitting gloomly. Myeong Joo teased him, saying that Mo Yeon had just asked something about Shi Jin. When Myeong Joo turned her back, she found herself facing Seo Dae Young.

The next morning, despite trying to avoid Shi Jin, Mo Yeon kept meeting the guy. Shi Jin asked if Mo Yeon wanted to go out with him.

On the way, the car that Mo Yeon and Shi Jin rode on entered a minefield. The two of them left the car in the minefield and walked for some time, intending to hitch a truck to go back. They managed to hitch a truck and sat in the back.

Shi Jin asked Mo Yeon about her question to Myeong Joo. He also asked whether Mo Yeon’s name was included in the list of doctors who would go back to Korea on the next day. “No,” Mo Yeon answered. “I want to stay here with you.” Yay! It was Mo Yeon’s first time to admit that she also had feelings for Shi Jin.