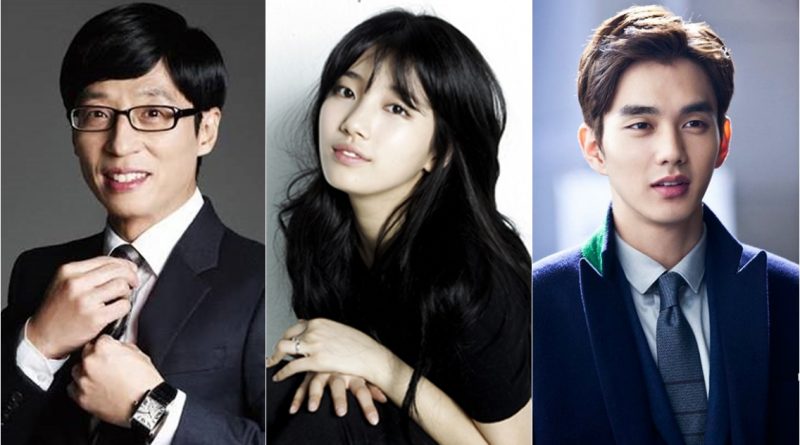 You must often hear the word ‘national’ in front of an artist’s name. Although many celebrities are talented, but not all of them have the honor of getting a national title. Because the title is given to those who are considered experts in a particular field. Here are 5 Korean celebrities with national title:

No wonder Yoo Jae Suk has the honor of ‘nation’ in front of his name. This 1972-born celebrity is a comedian, MC, show host, and tv comedy show host. His talent in leading a show as well as a variety show is amazing The nickname was given by Korean netizens who claim that Yoo Jae Suk is Korea’s most popular comedian today. There have been many shows and events he hosts and he always creates huge popularity in Korea and abroad. Call it Running Man, Infinity Challenge, and Happy Together. He is also dubbed the ‘Grasshoper’ because he often wears green colored shirts like a grasshopper. He is also very kind and down to earth and makes many artists confident to attend the shows he leads.

Suzy is a singer and actress who was born in 1994. She is famous through her role as Go Hye Mi in the drama KBS 2TV ‘Dream High’, Jang Ma Ri in ‘Big’, and Yang Seo Yeon in the movie ‘Introduction to Architecture’. In addition, she debuted as a member of the girl group Miss A under JYP Entertainment agency. Suzy has left a very long impression with natural acting and innocent charm, so she was nicknamed as Korea’s first love icon.

IU or Lee Ji Eun is a singer, songwriter, and actress born in 1993. She is better known as IU. While still in school, IU participated in various auditions and had ambitions to become a singer. She then signed a contract with LOEN Entertainment as a trainee and began her musical career at the age of 15 years. She went through the following years with a stable album release and success. But through the album ‘Good Day’, the main song in the album that was released in 2010 has made her reach the national stardom. ‘Good Day’ was at the top of the music chart for 5 consecutive weeks.

This one is not an individual but a girl group SNSD. Girls Generation, also known as SNSD is a group formed by SM Entertainment which originally consisted of 9  members. Taeyeon, Sunny, Tiffany, Jessica, Hyoyeon, Yuri, Sooyoung, Yoona, and Seohyun. However Jessica decided to leave SNSD in 2014. And in the year 2017 shocking news hit SNSD again. Sooyoung, Seohyun, and Tiffany decided not to renew their contract with SM Entertainment. But keep in mind that when SNSD debuted in 2007, they attracted a lot of attention. Until finally when the song ‘Gee’ was released in 2009, which became the top song in KBS Music Bank for 9 consecutive weeks making the song became the most popular Korean song of the 2000s by Melon. The next year ‘Tell Me Your Wish’, ‘Oh!’, And ‘Run Devil Run’ songs characterize SNSD’s music style as elctropop and bubblegum pop. Then they develop their music into various genres such as hip hop, R & B and EDM. SNSD is also a dominant figure in the hallyu and becomes the most popular Korean girl group.

Yoo Seung Ho was famous as a little South Korean actor who appeared in the movie ‘In The Way Home’ in 2002. After that, he co-starred in various dramas and movies. The dramas he starred were Master of Study, Suspense Thriller Blind, and Operational Proposal. At a young age, Yoo Seung Ho entered military and then returned with starring in ‘Remember’ in 2015. Yoo Seung Ho started his acting career at the age of 7 years. He appeared in a television drama in 2000. But he just won the stardom in the first movie ‘The Way Home’ as a child who learned to appreciate the life of the feeling when forced to spend the holidays with a deaf grandmother. The low-budget movie surprisingly became a box office. Automatically, Yoo Seung Ho received the title of ‘Korea’s Younger Brother’.

Hyeri’s First Appearance After the Revelation of Her Relationship

August 24, 2017 Tri Comments Off on Hyeri’s First Appearance After the Revelation of Her Relationship