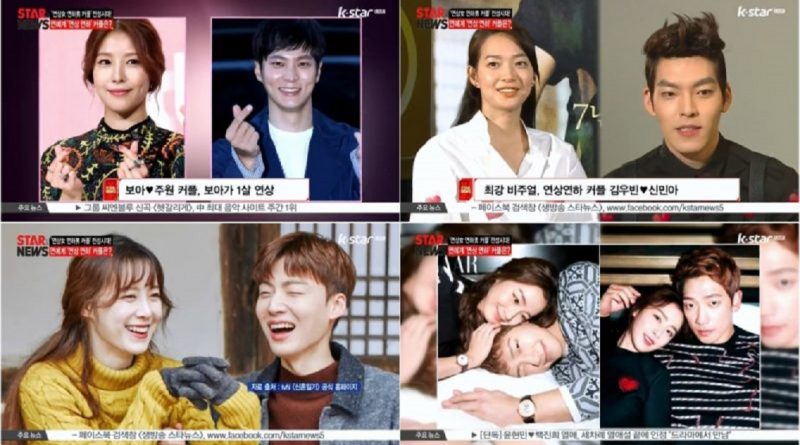 Recently, couples who have an age gap are becoming a trend. This year is opened by Joo Won-BoA couple to Ryu Hyun Kyung-Park Sung Hoon, then there is a celebrity couple who has gotten married, such as Bada, Ku Hye Sun, etc

Actress Ryu Hyun Kyun and actor Park Sung Hoon are dating. They meet through a musical performance ‘Almost Maine’ and now become a couple. Ryu Hyun Kyung was born in 1983 and 2 years older from Park Sung Hoon who was born in 1985. Recently, the news about Ivy and Go Eun Sung breaking up becomes a hot topic. On March 17, according to Ivy’s agency, previously they have decided to end things but now they are continuing their relationship.

Another surprising news comes from actress Han Chae Ah. Her lover is Cha Se Jji, a man who is 4 years younger than her. Then in last January, there is Joo Won and BoA with their one year age gap. The two meet because of their close friends then they start seeing each other. It is reported that they become close because of their similar hobbies, golf and hiking.

The age-gap couple who gets married is not only a few as well. Bada received the marriage proposal from her husband who is 9 years younger than her through sky-diving. Then there is Ku Hye Sun who gets married first. Not long ago, Ku Hye Sun announced that she quits from ‘You’re too Much’ because of health problem. However, through a variety show, Ku Hye Sun along with her husband, Ahn Jae Hyun showed a romantic marriage life and got the nickname ‘AhnKu Couple’. Ku Hye Sun is 3 years older than Ahn Jae Hyun.

The married couple Rain and Kim Tae Hee who got married in last February also has a year age gap. Recently, they are stealing the public’s attention through their appearance in a magazine and show their affection toward each other.