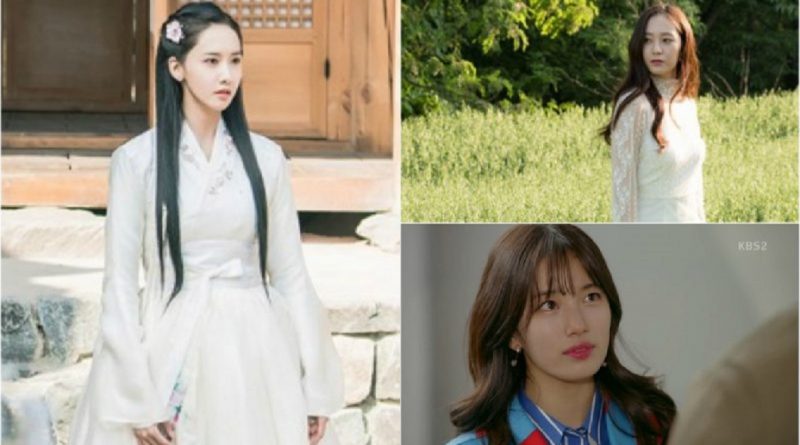 Since a long time ago, idols from boy groups and girl groups often challenge themselves to act in a drama. Some of them are successful in convincing drama viewers with their natural acting. Today, CastKo will discuss some idol-actresses whom we think are the best among others. Who are they?

Who does not know Im Yoona? Born in 1990, Yoona debuted as a member of SNSD in 2007. She started her career as an actress with a small role in ‘Two Outs in the 9th Inning’ shortly after debut. Her first lead role was in ‘You are My Destiny’ (2008) as Jang Sae Byuk. Since then, Yoona has won many awards from various annual awarding events. Soon, Yoona will come back to the drama screen in ‘The King Loves’ with Im Si Wan and Hong Jong Hyun.

Debuted from the same agency as Yoona, Krystal is known as a member of f(x) first before starting her acting career in 2010 as a cameo in ‘More Charming by the Day’ as her own self. Her acting skill started to gain more recognition after she starred in ‘The Heirs’ (2013) as Lee Bo Na. On July 3rd, Krystal’s latest drama, Bride of the Water God, had just premiered its first episode.

Suzy debuted as a member of girl group Miss A in 2010. In 2011, she got her first lead role in ‘Dream High’. She has starred in several other dramas and movies after that. This year, Suzy will act against Lee Jong Suk in ‘While You Were Sleeping’.

Hyeri, who was ranked third in Forbes Korea’s Power Celebrity list in 2016, joined Girls’ Day in 2011. In 2012, she had her first acting gig in ‘Tasty Life’. Her reputation as an actress skyrocketed after starring in ‘Reply 1988’ in 2015. Last year, she also starred as the lead role of a drama called ‘Entertainer’.

March 31, 2017 Tri Comments Off on Lee Sang Woo and Kim So Yeon to Get Married in June
MOVIE VIDEO