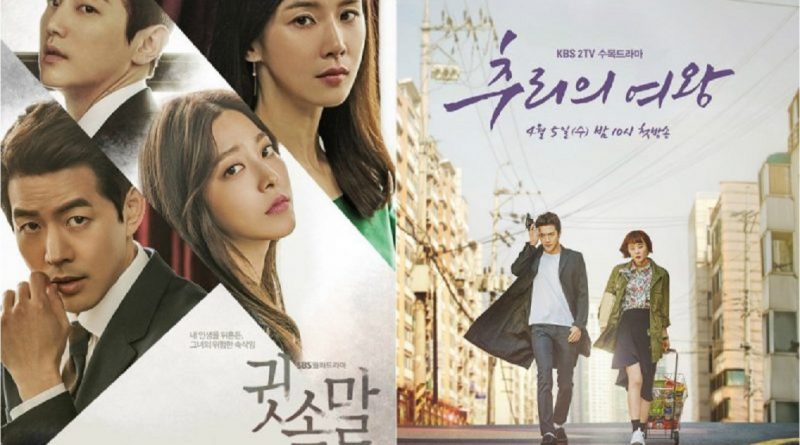 The new dramas nowadays have been giving a fresh air to the audience. If compared to the usual romance drama, the collaboration of the woman and the man in these new drama seems to be gaining attention. These afternoon weekdays drama have been attracting the viewers to watch them.

SBS drama, ‘Whisper’, ranked 1st. Shin Young Joo (Lee Bo Young) and Lee Dong Gun (Lee Sang Yoon) have been showing a great relationship. First, Shin Young Joo seemed to despise Lee Dong Gun. Initially, they were enemies, but as the story developed, they are up against a bigger evil plot and finally, they work together.

‘The story of a woman and a man who started from being enemies then turned into love, with a background of legal issues, then finally united’. Then they both fall for each other. However, the story in this drama that gives a social resonance, the romance in it does not shine with happiness. Instead, the stories from the characters that give tension to this drama make it more enjoyable.

KBS2 drama ‘Mystery Queen’ also has a story about a relationship between a man and a woman which is hard to guess. An ordinary wife, Yoo Seol Ok (Choi Kang Hee) and detective Ha Wan Seung (Kwon Sang Woo) become a ‘partner’ in investigating cases. Finding the flaws in their opponent and pouring all their energy to catch the suspect make the audience feels excited.

KBS2 drama ‘Chief Kim’ which has ended on March 30 and created a syndrome, its romance is yet to be finished. The male main character and the female main character who then united, built a strong relationship. There is no kissing or hugging scene. This drama is clearly different because it has reduced unnecessary romance scenes and focused only on important and necessary stories.