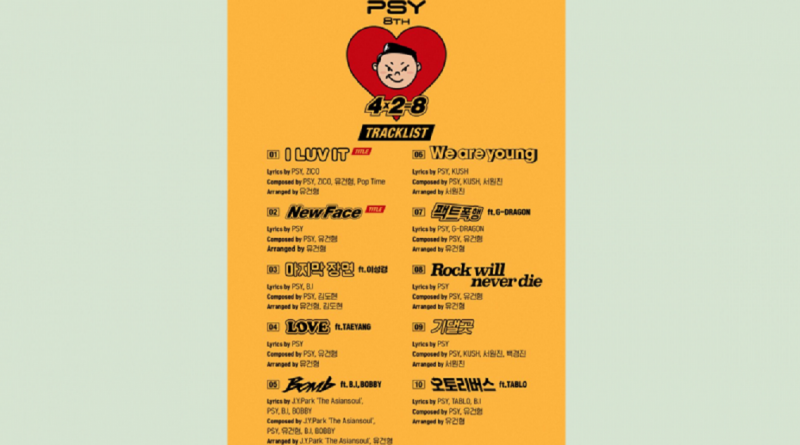 The tracklist of PSY’s upcoming solo album is finally revealed!

Image source: YG Entertainment
On May 7th, YG Entertainment released a list of songs which will be included in the 8th album of PSY, ‘4X2=8’. The album is scheduled to be released on May 10th.

‘4X2=8’ attracted a lot of public attention because PSY will be collaborating with other YG artists such as Big Bang G-Dragon and Tae Yang, Epik High Tablo, IKON Bobby and B.I, and actress Lee Sung Kyung. Lee Sung Kyung’s melodious voice can later be heard in a song called ‘Last Scene’, while G-Dragon is in the song ‘Fact Violence’.

The songwriters who are participating in this album are already well-known. Park Jin Young, Zico, Bobby, B.I, Tablo, Yoo Gun Hyung, Kush, and PSY himself will are taking a part in writing the songs for this album.

It is also reported that actor Lee Byung Hun and Apink Son Na Eun will be the models for the music video of the main track, ‘I Luv It’ and ‘New Face’.