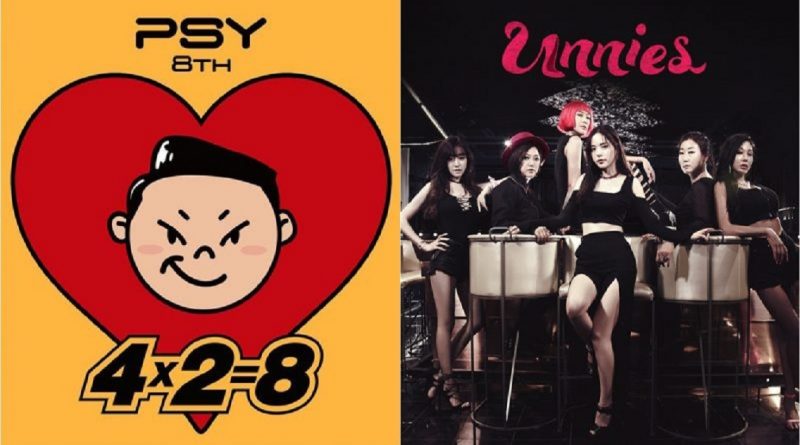 On May 10, PSY released his eighth album titled ‘4X2=8’. After the release, ‘I LUV IT’ tops the melon chart and wins over his rivals ‘The Last Scene’ which features Lee Sung Kyung also tops the chart and gets an ‘all-kill’.

However, then appears his strong rival. ‘Slamdunk Sisters’ which is a variety show from KBS 2TV releases Unnies newest song titled ‘Right’ on May 12 and gets an ‘all-kill’ on various music charts. ‘Right’s a funky dance themed song which has a message that you don’t have to fear anything with Unnies. Jun So Mi produces the rap along with Hong Jin Yeong who just try to rap. We can feel the chemistry and the different qualities of the seven members through this song.

On May 15, TWICE will also make a comeback. They will make a comeback with a song produced by Park Jin Young, ‘Signal’. When they released the MV teaser the song is already getting a warm response with a promise that it will become a hit 5 times. TWICE has earned the nickname ‘King of the charts’, a group that shows their uniqueness. Seeing PSY and Unnies on the charts like this, it looks like TWICE will take over the position on the upcoming May 15.

Amidst this competition, Sechs Kies shows an interesting thing. On May 13th at 8 am, Sechs Kies is ranked 1st on the Naver Music charts. Previously in ‘Music Bank’, Sechs Kies gets the first position. The appearance of idol Sechs Kies cannot be avoided.

This show that some things cannot be predicted on the charts. The listeners are expecting this various music to be equally enjoyable to listen.