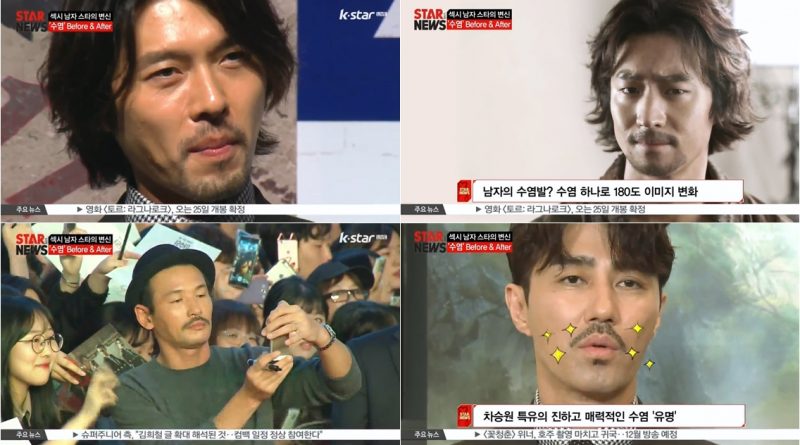 Hyun Bin also transformed as another figure in the movie ‘The Swindlers’ which releases in November. He displays amazing visuals by growing a beard. His character is enough to thrill emotions with a gentle charisma in a strong male figure. It also ensures Hyun Bin’s beautiful visuals with long hair and beard.

Lee Je Hoon has transformed into a spectacular man since his debut through the movie ‘Anarchist from Colony’. Usually, he looks clean and tidy, Lee Je Hoon has a long beard and looks a little crazy, he certainly becomes one of the Chungmuro stars. Actor Jo Jin Woong also shows a strong impression with a Hollywood-style mustache. When Jo Jin Woong does not have a mustache, he has a hot and sexy image and becomes the top-ranked ideal man of women.

When talking about a mustache and beard, Cha Seung Won becomes the first to appear. His beard is a trademark. Cha Seung Won has long been famous for his beard. He looks weird without his beard. His beard still makes him the most enchanting and beautiful figure. Next, Ha Jung Woo, one of the handsome gentleman icons. When he grows a beard he shows masculinity. Without his beard, he does not look strange with his clean image.

In addition, actor Hwang Jung Min also gets a strong impression when he has no beard, but when he grows them his image becomes warm. The mustache and beard match the trendy fashion and are regarded as one of the charms desired by other men. Actor Ryu Seung Ryeong also has a thick beard! Although it is long, it blends with a strong impression and his manly image. In the movie ‘All About My Wife’ he shows the figure of a Casanova who looks good with beard. The sexiness, wildness, and others have radiated the sexy charm of gentlemen with a beard.

November 27, 2017 Ria Comments Off on Celebrities Winter Fashion at The Premiere of ‘Room No.7’
STAR VIDEO