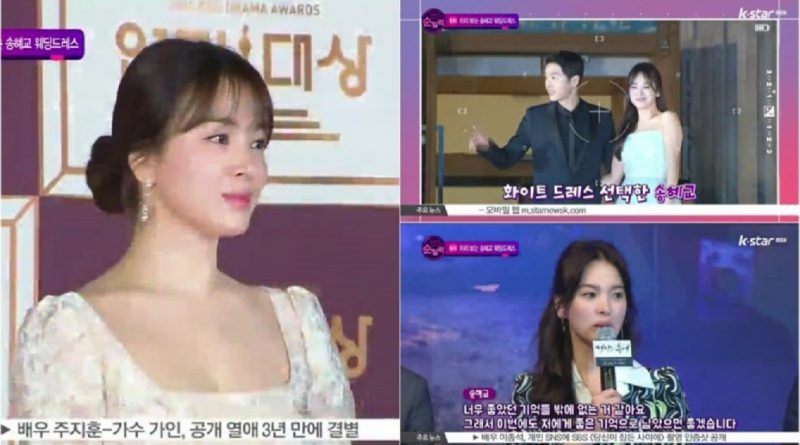 Along with ‘SongSong Couple’ wedding news, the kind of dress that will be used by Song Hye Kyo as a bride gets a lot of attention.

Previously, Hallyu star Jeon Ji Hyun showcased her elegant and luxurious appearance with a transparent beaded décor dress during the press-conference that she held before her wedding. Kim Tae Hee, who made her wedding ceremony looked like a movie, talked directly to her stylist and participated in everything,
from design to production, to create her dream wedding dress. In May, Sung Yoo Ri wore a unique dress on her wedding day. News of her marriage surprised many fans. The wedding dress that she wore costs roughly two million dollars. Sung Yoo Ri bought the dress from an Australian designer.

The kind of dress that will be worn by Song Hye Kyo, who will join the ranks of beautifully married girls, also attracts attention. Song Hye Kyo has appeared in various beautiful dresses in awards ceremony. At the 52nd Baeksang Arts Awards awards, which she attended with Song Joong Ki, she chose a long white dress, which looked very similar to a wedding dress. At that time, Song Joong Ki opted for a black suit while Song Hye Kyo chooses a white off-shoulder dress, making them look like a married couple. In the drama ‘That Winter, the Wind Blows’, Song Hye Kyo wore an elegant wedding dress. The fans are very curious about the wedding dress that she will wear on her wedding day.

June 18, 2018 Ria Comments Off on 4 Korean Celebrities Who Have Unique Allergies
DRAMA Rank&Talk

August 22, 2017 Tri Comments Off on Max Changmin and Choi Siwon Return From the Military
MUSIC VIDEO