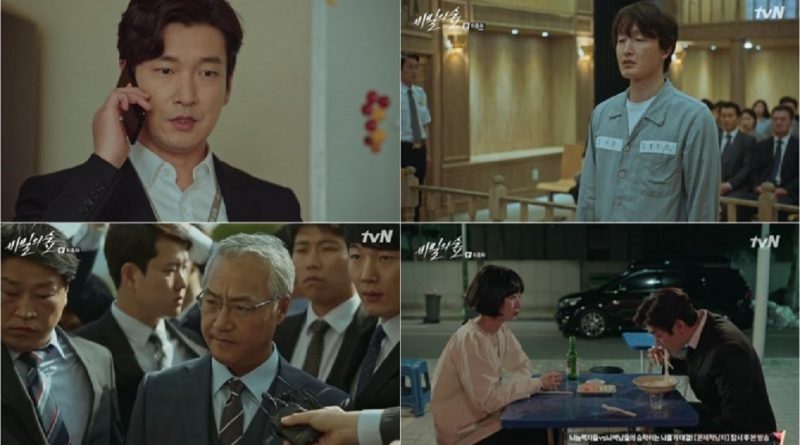 Based on the confession, Hwang Si Mok arrested Lee Yoon Bum and accused the seniors involved. He did not only captures the murderer, but he also captured the corruptors in a cold way.

“You chose to be dishonest by closing your eyes and being quiet. You can change the situation, but you decided not to. We will no longer be affected by any injustice done by the prosecutors, we will dedicate ourselves to the benefit of the people. To be responsible. To be fair, and to be more honest. We will do our best to avoid cases like Lee Chang Joon’s.” Hwang Si Mok said.

But as time passed, politics was still corrupt, and the conglomerates remained in power. Corruption done by prosecutors continued to occur. For health reasons, Lee Yoon Bum submitted a suspension request. His daughter, Lee Yeon Jae (Yoon Se Ah) became the director of Hanjo Group. Seo Dong Jae contemplated Lee Chang Joon’s death, but in the end, he decided to work as a prosecutor again.

‘Secret Forest’ premiered on June 2nd. The drama is full of tension, strong stories, and extraordinary acting from the actors and actresses. These three things were what made this drama perfect and constantly received praise from the viewers on each episode.

Fans of the drama are expecting a second season for ‘Secret Forest’, as Hwang Si Mok is back to his place in the prosecutor’s office. The crimes and corruptions that should be punished are still rampant. The drama makes viewers want to follow Hwang Si Mok’s ways of maintaining justice.