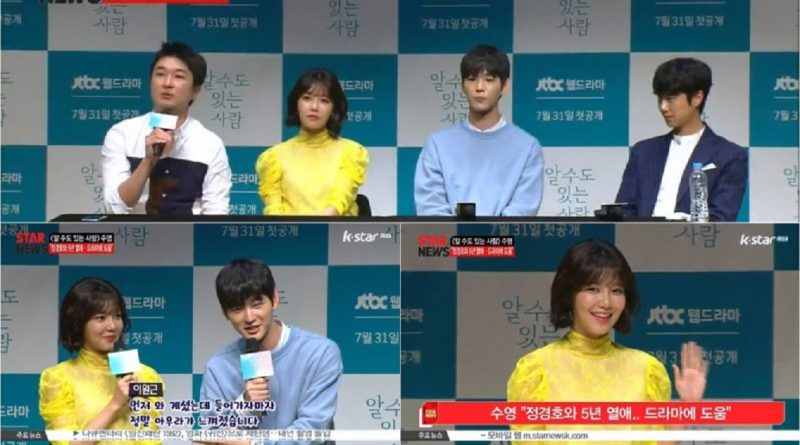 SNSD’s Sooyoung, who is currently in a relationship, admitted that she did not have much difficulty in portraying a character who has been in a long-term relationship. In the press conference of JTBC’s webdrama ‘People You May Know’, Sooyoung mentions her boyfriend, Jung Kyung Ho, even before she was being questioned by reporters. “Lee Ahn and Jin Young’s relationship in this drama has been going on for 8 years, and since I’ve been in a long-term relationship myself, I kept imagining my own boyfriend during shooting. Therefore, it was a little bit difficult for me to adapt during shooting.”

Just like her character, Lee Ahn, who’s working as an entertainment producer, Sooyoung has been working for nearly 10 years in this industry. Sooyoung, who has nearly 10 years of career under her belt, is paired up with actor Lee Won Geun, who’s her ‘dongsaeng’ in the entertainment world.

Sooyoung, who’s more well-known as a singer and dancer, is now challenging herself to acting by appearing in dramas.

April 4, 2017 Tri Comments Off on The Stars Show Their Support to ‘One Step’ Movie
MOVIE VIDEO