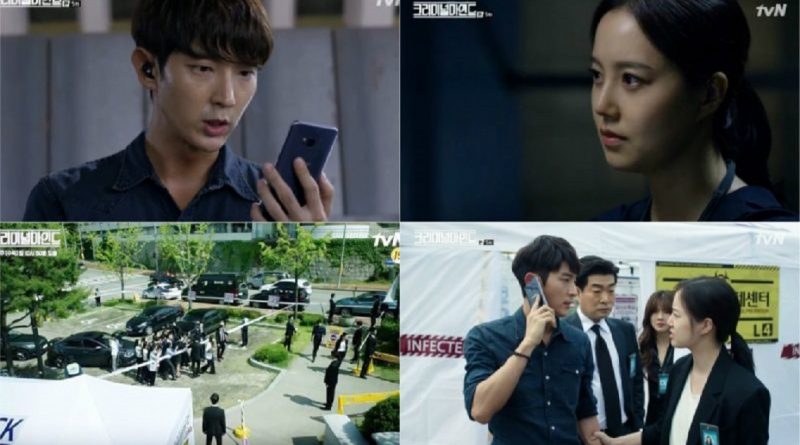 In the recent episode of tvN ‘Criminal Minds’ which aired on August 9th, it shows the NCI team who is investigating the anthrax attacks. This anthrax attack occurs in a park in Seoul where people who are playing in the garden have difficulty to breath.

NCI states that it is a terror of anthrax attacks, then they control the media so that people won’t have to worry too much. Hyun Joon (Lee Joon Gi) and Ha Sun Woo (Moon Chae Won) go to the scene and find the suspicious guy and chase after him. Hyun Joon loses track of the man after a fight.

NCI found a secret research laboratory when they are looking for a doctor who learned about anthrax and investigated his home. Lee Han (Go Yoon) enters the laboratory by himself to capture the suspect, but the suspect fled after spreading anthrax.

The NCI team finds out where the next terror scene is and is fighting to prevent further terror attacks. The enemy tries to spray anthrax with a bomb, then Sun Woon drives the car containing the bomb to a safe place. But only 5 minutes left and a traffic accident happened so the road was closed.

Sun Woo sends a photo of the bomb and sends it to Hyun Joon, then Hyun Joon shows how to stop the bomb. Eventually, the bomb was defused by both of them.

August 11, 2017 Gita Comments Off on Seven O’Clock and Kim Seulgi Donated With Their Talents, How’s Their Chemistry?
STAR VIDEO