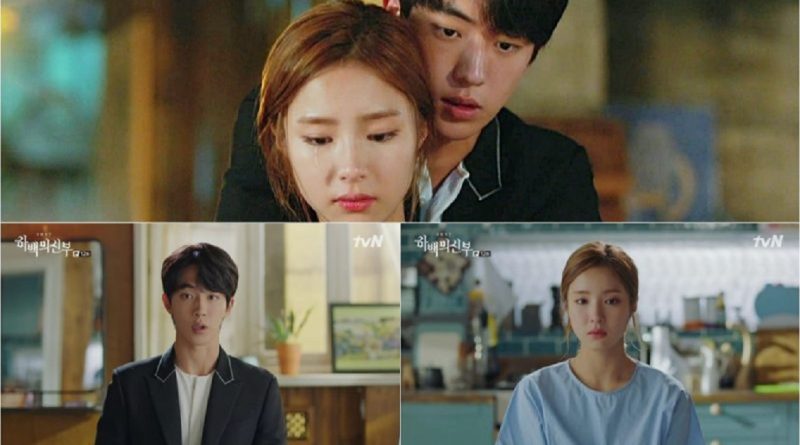 On August 8, in tvN’s Monday Tuesday drama ‘Bride of Water God 2017’, it portrays the separation of Habaek (Nam Joo Hyuk) and So Ah (Shin Se Kyung). That day Moo Ra (Krystal) meets So Ah, and Habaek reveals that he loves So Ah. Because Habaek is the god of hydrangea, he must leave the human world, she asked him to just leave.

So Ah realizes that gods and humans cannot be together. Finally, she gave up with their relationship. After So Ah meets Habaek, she reveals her trauma in the past, and fails to do anything, “Come back to where you should be”.

The next day, Habaek decided to leave the afternoon lady. Habaek meets So Ah “I go first, turn on the light when it’s getting dark. Don’t just eat ramyun and eat rice even though you cannot cook. Clean the house despite it’s tiring. If the streetlights in the alley are broken, you have to complain. Don’t walk in the dark”, said Habaek.

Habaek asked Nam Soo Ri (Park Kyu Sun) to step aside, and continued the conversation. He said, “You remember the lie you said to me? This time you cannot lie. I want to go with all of my strength. I am a god and want to protect you but why I am ashamed and sorry to say it. Is it going to be okay if I go, I want to ask that. I feel I cannot give anything. We’ll part here”.

So Ah seemed to return to reality without any difficulty. Hoo Ye (Im Joo Hwan) invites her to eat together, talks with So Ah and shows her interest. But So Ah pushes him and returns home quickly, she remembers about Habaek and feels lonely.

So Ah finds the separation to be hard to endure. The next day she seemed to see Habaek’s shadow. “I’m looking for you, you’re dumped? I told you you’re not good at lying, right? Do you understand now? You cannot hurt yourself. Look at the identity number you write as a god”, after saying it, he disappears again.

After that So Ah struggled with the pain she suffered due to the separation. So Ah seemed to see Habaek standing in front of her house, and dropped her handphone. So Ah runs towards Habaek and cries.