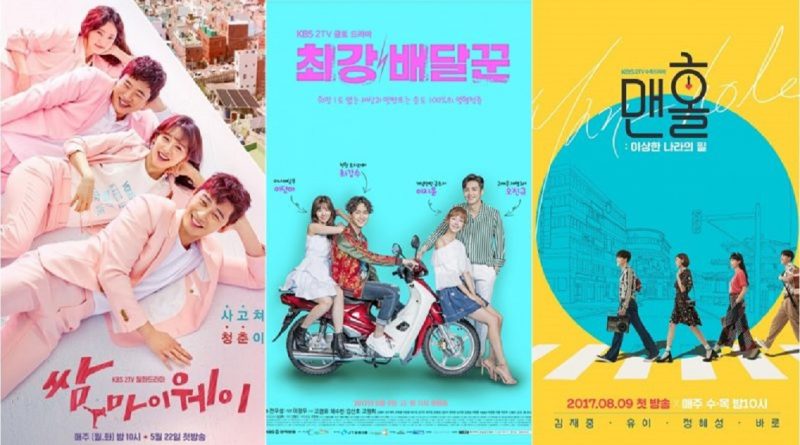 The dramas from KBS recently become very famous. In addition to the already finished ‘Fight For My Way’, the new drama ‘Strongest Deliveryman’ since the first broadcast has been getting continuous praises. On August 9, the Wednesday Thursday drama ‘Manhole’ has started airing and is ready to become one of the top dramas in ranking.

‘Fight for My Way’ brings up a realistic theme, illustrating the struggle of young people who don’t easily give up on achieving their dreams. Based on the spec that is difficult to reach by minorities. At the time of its broadcast, many people agreed with the story. The last episode earned a 13.8% rating, topping the rank.

‘Strongest Deliveryman’ episode 2, tells about the daily life of Lee Dan AH (Chae Soo Bin) who started the day earlier than the others, worked hard, and studied. It has received a warm response from young people living in this era.

On August 9, the new Wednesday Thursday drama ‘Manhole’ aired. This drama is a comedy that centered on the random time slip experienced by the main character. ‘Manhole’ tells the story of Bong Phil (Kim Jae Joong) who has been preparing for the civil exam for 3 years, hearing about the marriage of his unrequited love for 28 years Soo Jin (Uee), Bong Phil slips into a hole and travels through time.

The Youth-themed dramas from KBS aren’t over yet. Different tales of youth with different problems and illustrated with different characters and themes, what developments will be shown again adds to the hope of a satisfying story from the dramas.

August 7, 2017 Tri Comments Off on The Hardwork of the Actors Who Will Have Their Military Service
DRAMA VIDEO