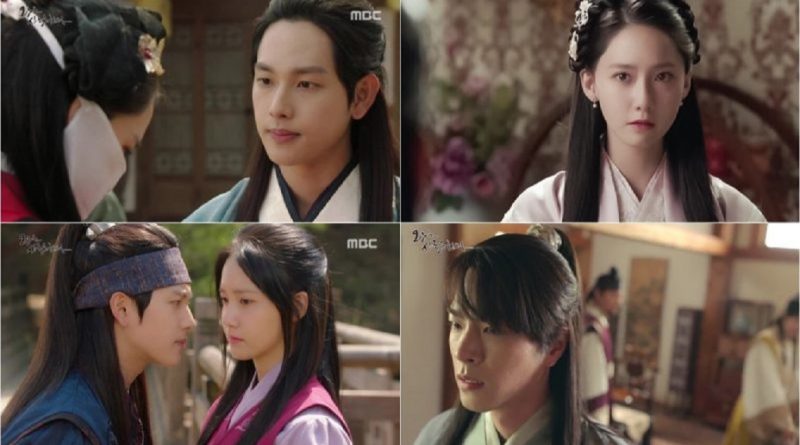 On August 8, in MBC’s ‘The King Loves’ episode 15 and 16, Wang Won (Im Siwan) knows Eun San’s true identity (Im Yoona). In this episode, thanks to Wang Rin (Hong Jong Hyun) and Wang Won, Eun San can avoid her marriage to Wang Jun. King Chungyeol is angry when he finds out Wang Won stopped the marriage of Eun San and Wang Jun and summoned everyone.

Eun Young Baek said she should not have let go of Eun San’s cover. During this time Eun Young Baek avoids the recruitment of women’s groups because there are injuries on the face of his daughter.

Moo Bi, one of Song In’s men, said to King Chungnyeol that Eun San’s wound has recovered. King Chungnyeol orders to remove the cover of Eun San. Moo Bi takes off Eun San’s cover and at that moment Wang Won stops him.

Moo Bi releases the wristband that Wang Won receives from Eun San. King Chungnyeol said “He said she (Eun San) is the woman he likes for the first time in his life”, Eun San was shocked to know Wang Won’s sincerity. King Chungnyeol even allowed Moo Bi to pour Wang Won’s head with alcohol.

At that time, Wang Rin rescued his youngest sibling named Wang Dan. He met the real princess and will go in his place. Princess Won Sung accepted the offer. To put Wang Dan’s name on the list, Wang Won chose Wang Dan. At the party, 6 families including the royal family were present. But it only adds one person.

That person is Eun San. Princess Won Sung searches for Eun San’s father, Eun Young Baek, he even brings Eun San as one of the candidates. Wang Won cannot recognize Eun San whose face is closed.

Princess Won Sung ordered to release the cover of Eun San. Eun San takes off her cover in front of Wang Won. Wang Won is shocked to see Eun San.