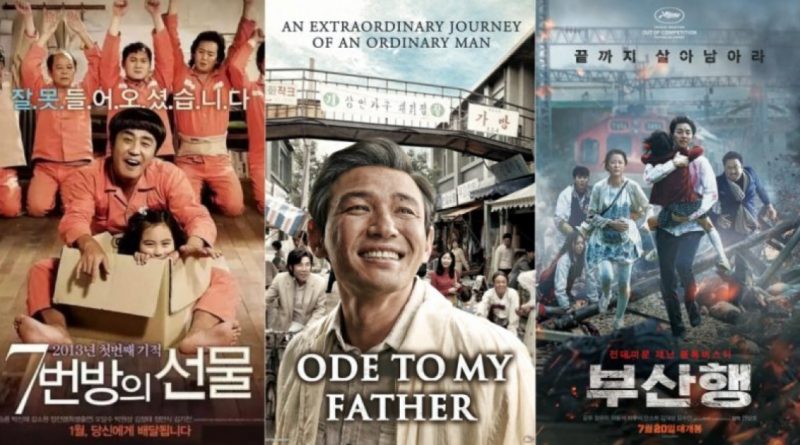 ‘Train to Busan’tells the story of Zombie attacking South Korea, and it managed to become the biggest revenues film in Box Office Korea throughout the year 2016. The zombie which is featured in this film is similar to zombies in the movie World War Z. The movie is directed by Yeon Sang Ho and starring Gong Yoo, Jung Yu Mi and Ma Dong Seok. It was premiered at the Cannes 206 Film Festival on May 13, 2016. On August 7, 2010, the film set the record for the first Korean film in 2016 that broke the record of more than 10 million viewers .

This South Korean film was produced in 2014 and directed by Yoon Je Kyoon starring Hwang Jung-min and Yunjin Kim. The 123-minute film with genre drama captures the history of modern Korea from the 1950s to the present day through the life of an ordinary person. The man, Deok Soo, has experienced events, such as the Hungnam Evacuation in 1950 when the Korean War erupted, going to Germany as a miner following the Korean government’s decision, until the Vietnam War. Deok Soo is married to a nurse and they start a simple life. The story of Deok soo and his family will continue through major events in Korean history until at the end of the film Deok Soo is portrayed as an old man. Currently, Ode to My Father is ranked second highest, the best-selling movie in Korean cinema.

The South Korean film, released in 2013, was directed by Lee Hwan Kyung and starred Ryu Seung-ryong, Kal So-won and Park Shin Hye. The film is a family moving and melodrama comedy about a man who suffers mental disorder unlawfully imprisoned for murder that builds friendships with harsh villains in his cell, and they help him see his daughter again by breaking the rules. The man, Lee Yong-go, was sentenced to death and sent to cell number seven, a loudest cell with high security. Although initially not easy, Yong-go managed to invite sympathy of others in the cell. Gradually, they increasingly believe that Yong-go is an innocent person and they want to help reverse the verdict in Yong-go re-trial.