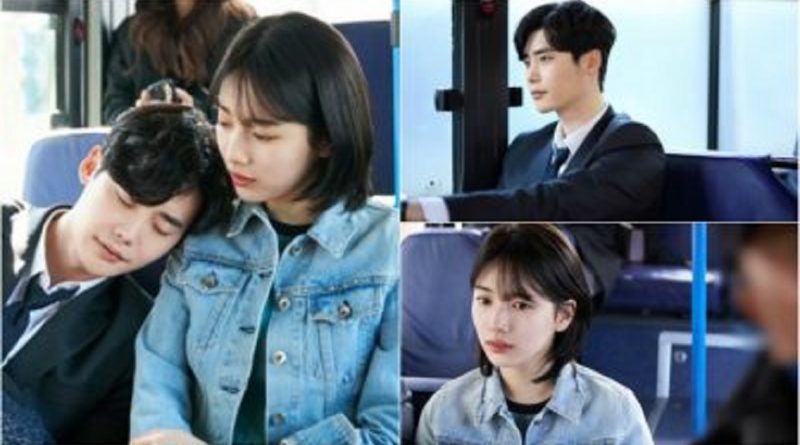 DRAMA
September 5, 2017 Ria K-DRAMA, While You Were Sleeping

The new SBS special drama ‘While You Were Sleeping’ on the 4th released the first couple photos of Lee Jong Suk and Suzy.

‘While You Were Sleeping’ is a story about a woman who is able to dream about unfortunate incidents and a prosecutor trying to prevent her dream come true. Lee Jong Suk acts as a junior prosecutor in Section 3 of Hangang Detectives, Jung Jae Chan, and Suzy plays the role of Nam Hong Joo, who gets a vision for the future.

Lee Jong Suk and Bae Suzy looked sitting side by side on a bus, Lee Jong Suk leaning his head on Suzy’s shoulders, warming her romantic mood and raising the audience’s curiosity about the situation.

Lee Jong Suk-Bae Suzy’s first drama started on March 2nd in Seoul, Korea. Lee Jong Suk in a suit and Bae Suzy with her short hair showed a bright spot by performing together. In addition, the two started their first shoot in a flowering atmosphere, such as talking to Oh Chung Hwan about filming and exchanging opinions before filming.

The party of drama ‘While You Were Sleeping’ said, “Lee Jong Suk-Bae Suzy’s photo received a hot reaction among the staff. The perfect photo of a young man seen with a beautiful girl on the bus,  showing a sweet chemistry. ” This drama gets a lot of expectations from the viewers.