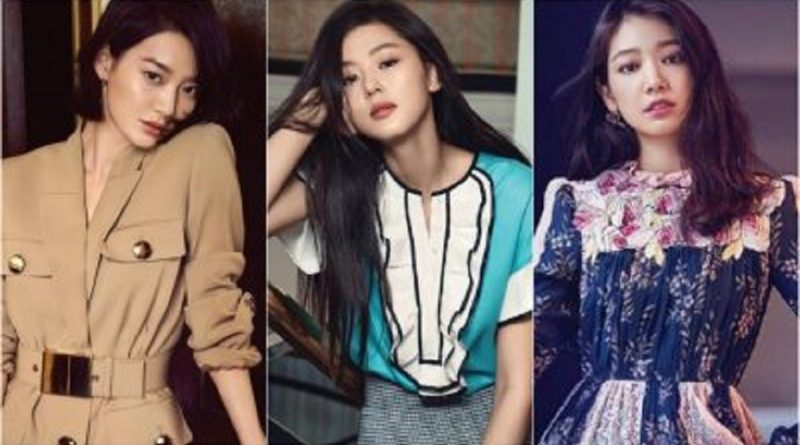 The fashion style of celebrities has always been in the spotlight. No wonder if celebrities always try to look fashionable wherever and whenever they go. Their fashionable appearance is supported by the clothes of famous brands that have fantastic prices. Here are 4 actresses who always look fashionable with clothing worth tens and even hundreds of millions of dollars.

Above are some outfits worn by Jun Ji Hyun in the drama ‘The Legend of the Blue Sea’. The glossy pink dress from Dolce & Gabbana is worth 74.9 million. The hairy cardigan on the right worn on episode 14 ‘The Legend of the Blue Sea’ has a value of 103.8 million. Finally, underneath is a thick coral mantle from Chanel that costs 73.4 million. In several other episodes, Jun Ji Hyun also wore other famous brands, such as Tom Ford and Gucci which are already known as high-end brands.

Shin Min Ah is a fan of Valentino. The photo in the middle by Marie Claire in 2017 showed Shin Min Ah wearing a chiffon silk chiffon dress with a value of 137.7 million. Shin Min Ah also wore one of the collections of Michael Kors which is worth tens to hundreds of millions. In the poster for TVN ‘Tomorrow with You’, Shin Min Ah wore a flowering dress at a price of 50.7 million

Her role as a goddess in the tvN drama ‘The Bride of the Water God’ demanded Krystal to appear fashionable. In episode 16 while performing with Gong Myung, Krystal wore a lacy gown from Gucci for 32.4 million. The blue dress lace half sleeve in the lower left is also one of Gucci collection and worth slightly more expensive that is about 85.4 million. While the milk chocolate dress from ROCHAS used in episode 4 worth 44.8 million.

Park Shin Hye is a fan of famous brand ‘Chanel’. She attended the launch of  Chanel’s collection a few months ago. In the photo, Park Shin Hye wore a pink gown from Gucci and plaid flannel from Miu Miu that cost millions or even hundreds of millions rupiah.

Who do you think among the four actresses has the best style?