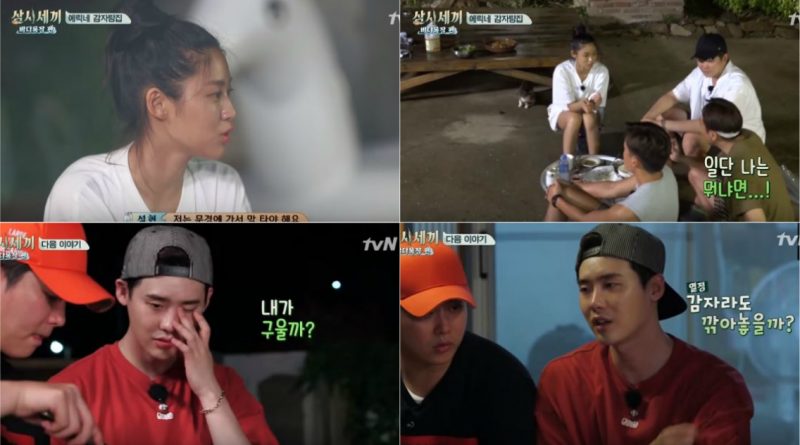 On the tvN ‘Three Meals A Day Sea Ranch’ which aired on September 15, Seolhyun talked about her three brothers.

Yoon Kyun Sang asked Seolhyun, “Which one is preferred between being an actress or a singer?” Seolhyun thought for a moment. Eric told her about his experience first. “Group activities are easy. Individual activities are difficult and very tiring. I’m not comfortable with cameras”, he said.

Seolhyun talks about her individual activities like Eric, “I feel proud of myself when doing something.” Regardless of the difference in debut time  and age, Eric and Seolhyun share the same feeling as an idol singer and actors.

Seolhyun is called a ‘home child’. “I rarely leave the house. I usually play with puppies”, she said. She continued, “My skin is black and the woman must be white and dry. I tried to do it in my words. But fans love my healthy dark complexion” expressing her gratitude.

Meanwhile, actor Lee Jong Suk will be performing as the fourth guest in next week’s episode.

Lee Jong Suk asked for ice cream in his mouth, but he was very meticulous. They laughed while doing unintentional blows on the forehead.

In the next episode, Yoon Gyung Sang and Lee Jong Suk are expected to play a major role in increasing the expectations of the viewers.