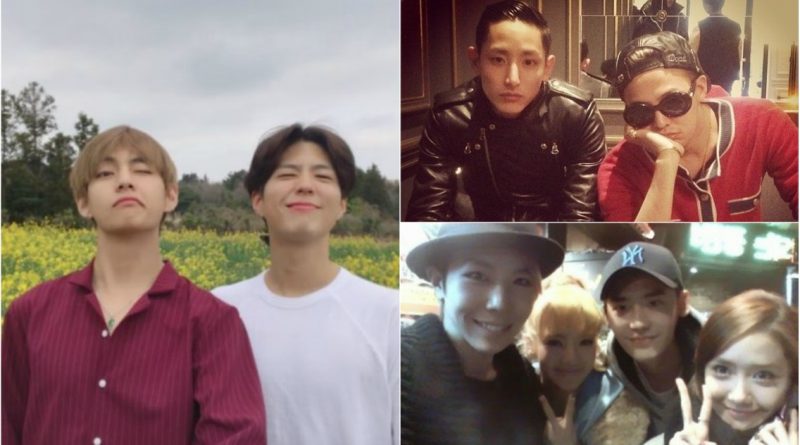 We might not expect that they could make friends. This friendship began when V approached Park Bo Gum by phone after asking for his number when he appeared on Music Bank while Park Bo Gum became the show’s MC. Since then, they became close and often had discussions about music. When V debuted as an actor, he also relied on his friend’s advice. They areoften seen hangout together to watch concerts and walking to the park and to the playground.

GD indeed has a lot of friends and some of them are models turned to actors. One of them is Lee Soo Hyuk. They share the love for fashion and become close friends because of that. They have long known each other even since their debut days.

Hyoyeon does have many friends that come from various circles. One of Hyoyeon’s close friends is Lee Jong Suk. In fact, Jong Suk once said that Hyoyeon is one of her friends that makes her comfortable telling as truthfully as possible. They met since they were both trainees. Although being together for a short time and ended up separating to different companies , they still support each other until now.

Cao Lu the baseball player has many friends who are Korea. One of them is Kang Ha Neul. They became friends at JoongAng University. They often meet for casual chatting, learning and even eating together. Kang Ha Neul even calls Cao Lu with a cute little name, Olu. Kang Ha Neul once talked about their closeness on MBC’s ‘Radio Star’.

November 25, 2017 Ria Comments Off on 4 Idols With Successful Solo Career After Leaving Their Group
BEAUTY Rank&Talk

June 16, 2017 Tirta Comments Off on Who Catch the Flower Bouquets at Celebrity Weddings?
MOVIE VIDEO

May 10, 2017 Tirta Comments Off on Go Soo, Kim Joo Hyuk, and Park Sung Woong in ‘The Tooth and Nail’ Movie Premiere
STAR VIDEO