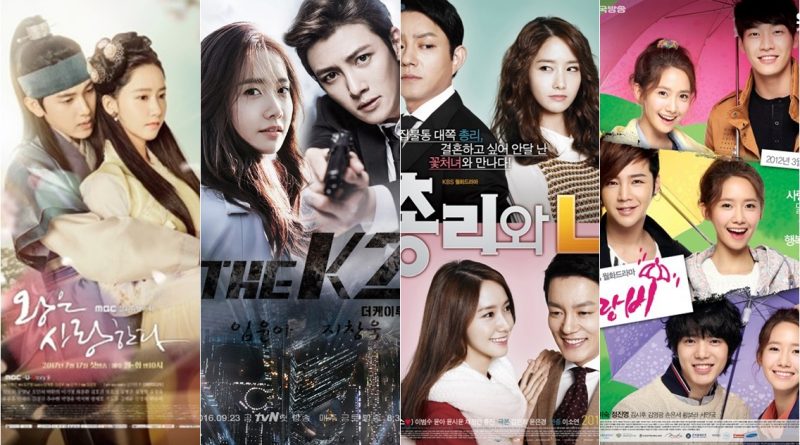 Debut as a member of South Korea’s popular girl band SNSD, Yoona began to expand her career from singing to acting. As an actress-idol, Yoona’s achievements are quite unique for the idol group member who started acting. She was in Seoul on May 30th, 1990. She debuted acting through the drama ‘9 Ends, 2 Out’ in 2007. One year later, she acted in the drama ‘Woman of Matchless Beauty’ and ‘Unstoppable Mariage’ as a cameo. Yoona’s career as an actress continues to soar and her acting talent that once felt stiff became more natural. She won an important award in the acting world through ‘You Are My Destiny’ which became her first major role. Since then, Yoona is actively continuing her activities as an actress both in dramas and movies.

The recently finished drama premiered on July 17th, 2017 on MBC Channel. ‘The King Loves’ is a historical drama with the setting of the Goryeo empire. It tells the story of Wang Won (Im Siwan) a Goryeo royal crown prince. He’s handsome. Wang Won has a friend named Wang Rin (Hong Jong Hyun) who comes from the royal family who also becomes his bodyguard. Then the beautiful Eun San appeared before them. She is the daughter of a wealthy man. All three then make a sweet friendship until Wang Won and Wang Rin fall in love with Eun San. Wang Won and Wang Rin’s friendship was tested,  and presence of Song In and Princess Won Sung have disturbed and complicated their lives. In addition to Im Siwan, Hong Jong Hyun, and Yoona, the drama also starring Kim Jung Wook, Oh Min Suk, Park Hwan Hee, Yoon Jong Hoon, and Jang Young Nam.

THE K2 is a Korean television series in 2016, starring Ji Chang Wook, Song Yun Ah, Im Yoona, and Jo Sung Ha. This tv series was aired on tvN. Telling the story of Kim Je Ha (Ji Chang Wook) where he is a former soldier who turns into a bodyguard. Je Ha, known as K2, is assigned to escort Choi Yoo Jin (Soon Yoon A), the wife of presidential candidate Jang Se Joon (Cho Seong Ha). Se Joon has a secret princess named Go Ahn Na (SNSD’s Yoona) who has a self-contained and depressed nature. She seemed to be hidden from the public. Ahn Na is the daughter of the presidential candidate who unfortunately is afraid of people. Kim Je Ha also meets Go Ahn Na and falls in love with the lonely girl. Kim Je Ha considers love only as a tool for revenge. Unfortunately Choi Yoo Jin’s ambition as the First Lady who hides the good and friendly nature she actually has.

First aired on December 9th, 2013 on KBS2, Yoona was paired with senior actor Lee Beom Soo. ‘Prime Minister and I’ is a romantic comedy drama that tells of a youngest prime minister in South Korean history named Kwon Yool (Lee Beom Soo). He has a reputation of having honesty, high integrity, and a good-looking father of three. Behind his perfect figure, Kwon Yool seems very incompetent in taking care of his children. Nam Da Jung (Yoona) is a reporter with full of enthusiasm in her work but always ends up missing an event. When Da Jung pursues Kwon’s prime minister for news, she got a lucrative offer. Eventually, the two were involved in a contract marriage. Da Jung becomes the wife of Prime Minister Kwon Yul who loves his three children.

‘Love Rain’ tell a story from two generations. In 1970, In Ha (Jang Geun Suk), an art student who has friends named Dong Wook (Kim Shi Hoo) and Chang Mo (Seo In Guk). All three are popular figures. One day Dong Wook and In Ha liked the same woman named Yoon Hee (Yoona). Knowing that his close friend Dong Wook also loved her, In Ha decided to resign. Later in the present, Joon (Jang Geun Suk) meets Ha Na (Yoona) by accident at Hokkaido station, Japan. The first meeting of both can be said terrible. They always fight every time they meet. But when he arrived in Korea, Ha Na and Joon were reunited with a different situation. Because Ha Na needs work and shelter, she is forced to work as a gardener in Joon’s studio and lives there. The longer the two become closer and the relationship develops. Then Ha Na learns that Joon is the son of In Ha, his mother’s first love. Ha Na and Joon are in crisis, they have to choose whether they should defend their love or let their parents unite.