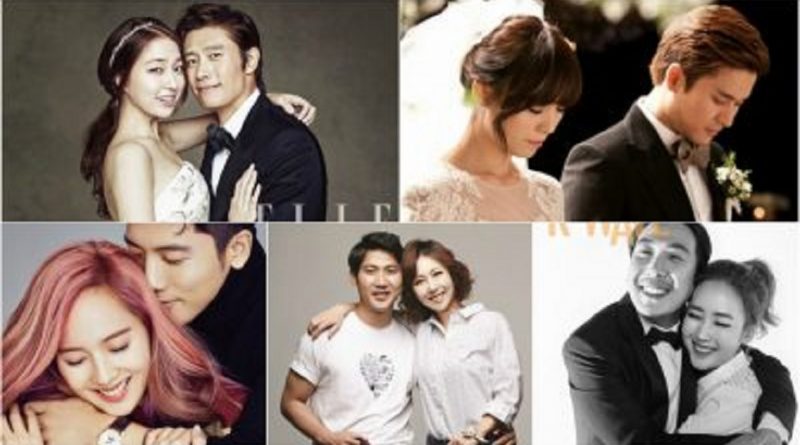 Behind the glorious reception of celebrities wedding, each pair of these Korean stars has their own romantic story. Starting from special meetings, to the recognition of feelings that will be remembered for life.

One of the biggest weddings that took place in 2013 was actor Lee Byung Hun and actress Lee Min Jung’s. The two were married on August 10th at the Seoul Grand Hyatt Hotel in a private celebration. Approximately, the wedding costed about 120 million won and the couple invited about 900 close relatives and friends. A number of Korean top stars present at the couple’s wedding include Kim Bum, Kim Tae Hee, So Ji Sub, Song Seung Hun, Go Ara, Jung Woo Sung, Han Hyo Joo and many more.

Wonder Girls Sunye got married to James Park on January 26, 2013 at Lotte Hotel in Seoul. Sunye who was a member of Wonder Girls seems to change the paradigm of idol who should not be dating or geting married. Sunye’s marriage was attended by 600 people including the members of Wonder Girls, Girls Generation, 2AM and many more. After the marriage, Sunye and James Park have been blessed with a child.

S.E.S Eugene married actor Ki Tae Young on July 23, 2011 at a church outside Seoul. The couple first met on set in 2009, while starring in ‘Creating Destiny’. At that time they acted as lovers. The couple finally fell in love in real life and got married. Although they claimed to start dating since 2010, fans made speculations that the two have been in touch long before that. This is because Eugene had appeared in a surprise party for Tae Young’s birthday.

Shoo who was also a member of S.E.S married a professional basketball player Im Hyo Sung on April 11, 2010, at Renaissance Hotel in Seoul. Shoo is the first-generation idol who got married among her colleagues. Eugene and Bada had become a bridesmaid for this beautiful woman. Shoo first met Im Hyo Sung in a basketball game. Both of them had time to exchange autographs. The couple currently has three children, a boy and a twin girl.

The member Running Man, Haha married Byul on November 30, 2012 at 63 Building in Seoul. These two stars are close friends for many years until in March 2012, Haha confessed to Byul that he had fallen in love and wanted to marry the woman. Byul who was touched by Haha’s sincerity accepted the man as a lover and eventually, the two stars were married on November 30, 2012. Now the couple has been blessed with the first child born on July 9, 2013.