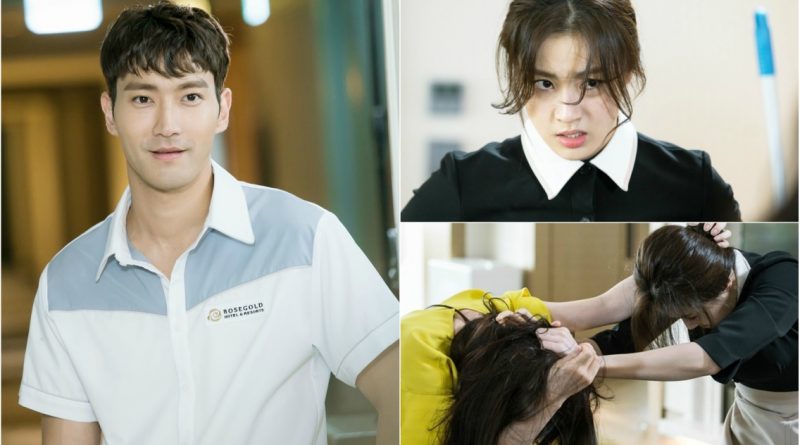 tvN’s Saturday-Sunday drama ‘Revolutionary Love’ which will premiere on October 14th  released the first set of pictures from Byun Hyuk (Choi Siwon) and Baek Joon (Kang So Ra) on the 9th that made the audience increasingly anticipate the drama.

Choi Siwon, who recently completed his military service returned to the drama with irreplaceable charm, and Kang So Ra with her ever-successful works make many audiences anticipate ‘Revolutionary Love’ in the second half of this year. The drama has attracted the attention since the release of the still-cuts. Kang So Ra, who was wearing the hotel room maid in the picture grabbed Seo Yi An’s hair.

In the released photo, depicted Byun Hyuk, the hotel owner who happens to be lurking, and Baek Joon, a fabulous part-time working girl. Baek Joon showed her strong character by pulling a woman’s head. Baek Joon who stared coldly gives hope for her appearance. However, Byun Hyuk who witnessed Baek Joon’s dramatic appearance looked handsome in his unblinking eyes.

The production crew of ‘Revolutionary Love’ said, “Byun Hyuk and Baek Joon are expected to play a role in bringing laughter and creating funny scenes to get viewers’ empathy.” The chemistry between Choi Siwon and Kang So Ra is indeed great and amusing.