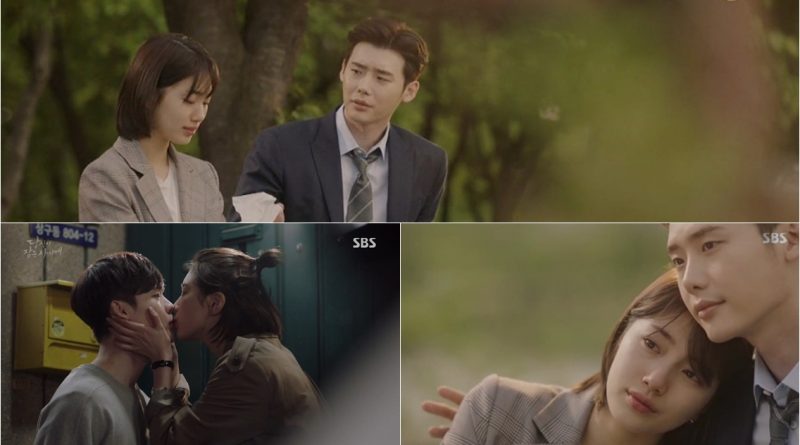 On the 18th, SBS Wednesday-Thursday drama ‘While You Were Sleeping’ episodes 13 and 14 depicted the love story of Nam Hong Joo (Bae Suzy) and Jung Jae Chan (Lee Jong Suk) who are growing more mature.

That day, Jung Jae Chan felt jealous with Han Tae Wook (Jung Hae In) who got stabbed by a knife to save Hong Joo and stayed at Hong Joo’s house. Both went shopping as Woo Tak’s request and there was a tense atmosphere while they were together in the car.

Hong Joo expressed her gratitude to Jae Chan who saved her while in danger. “I want to pay it all at once, but I cannot”, said Hong Joo. “You do not have to pay me back, just be careful.” Hong Joo teased Jae Chan, “If you look at me, you want to protect me and worry, right?” But when Jae Chan asked Hong Joo questions, she just became embarrassed and avoided the question. At that moment Jae Chan tried to kiss Hong Joo and said, “I’ll do this instead” but the seat belt prevented Jae Chan from approaching Hong Hoo’s face, his failed to kiss her.

In front of Hong Joo’s door, Hong Joo talked about Jae Chan’s behavior in the car. Jae Chan avoided her. At that time, Hong Joo immediately kissed him. Seeing Jae Chan’s frozen expression, Hong Joo said, “It does not seem to be like this” and finally rushed into the house. Jae Chan who at first looked shocked and silent getting Hong Joo kisses changed his expression and felt happy.

The next day, Jae Chan told Hong Joo who was trying to avoid him, “Yesterday nothing happened right? Do not be shy and look away from me.” The romance between them is increasingly represented by the skin ship. It is worth waiting to see how the charm of Jae Chan in expressing his affection to Hong Joo in the future. On the day’s episodes, Han Woo was not intimidated by the presence of his roommate who allegedly is a suspect of a murder case.