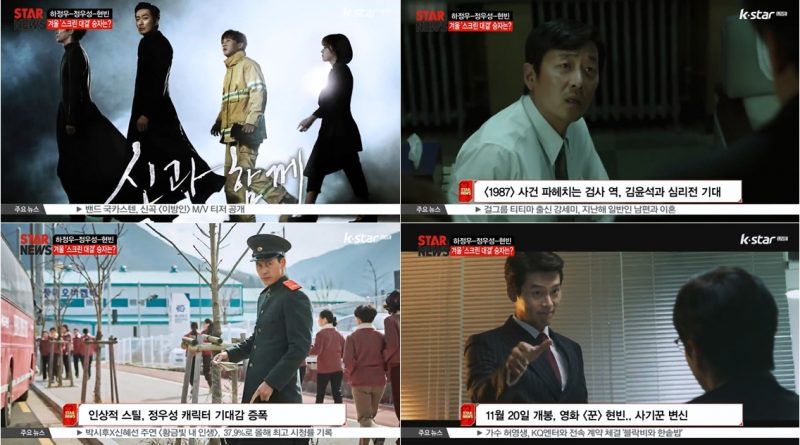 In the second half of this year, there are many works to be released, movies will be competing against each other in the final season of this year. Ha Jung Woo, Jung Woo Sung, and Hyun Bin, the top stars worth watching. In Winter, Ha Jung Woo returns to the big screen with 2 new works. In December, fantasy action movie ‘With God’ and ‘1987’ Humanitarian Film will air. Ha Jung Woo comebacks after 1 year 6 months since the summer movie ‘Tunnel’, the movie ‘With God’ is expected to be blockbuster and meets the audience on December 20th.

In Winter of this year, Jung Woo Sung returns with his blockbuster ‘Steel Rain’ action movie. His visuals have not changed much, but through this film, he will change as the most talented agent of the North Korean surveillance bureau and show a strong new character. His chemistry with Kwak Do Won is also good. The film ‘Steel Rain’ released still cuts of Ha Jung Woo and Kwak Do Won which then looks like destiny. The still-cuts are very impressive with unique cold aura and stares as North Korea’s lit agents, Jung Woo Sung’s movie is anticipated.

Finally, the movie ‘The Swindlers’ starring Hyun Bin will meet the audience in autumn this year. In the first half of this year, Hyun Bin released the movie ‘Cooperation’ which reached the box office and on December 22nd, he will star in ‘The Swindlers’. After the military, Hyun Bin plays a role in ‘The Fatal Encounter’ and ‘Cooperation’, he tries to transform into a brighter character. A con artist capable of disguising and boasting, he becomes more flexible than the previous one. After the first half releasing ‘Cooperation’ the second half with ‘The Swindlers’! Hyun Bin will return to box office twice in a year. It is interesting to see whether he will become the man of Chungmuro in 2017

May 16, 2017 Tirta Comments Off on Ok Joo Hyun Talks about Her Latest Drama Musical, ‘The Bridges of Madison Country’
STAR VIDEO

August 25, 2017 Ria Comments Off on Zico Denies Rumor About Getting Back Together With Seolhyun
MOVIE VIDEO

November 18, 2017 Ria Comments Off on Hyun Bin and Yoo Ji Tae’s Chemistry in ‘The Swindlers’