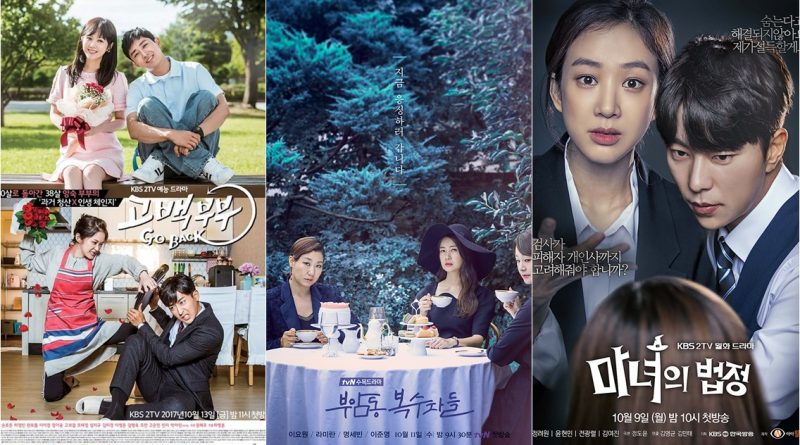 2017 is a great year for drama. There are a variety of spectacular dramas. There are stories about love, resentment, and laws that are more exciting than ever. Among other things, these are dramas that attract attention but were considered weak before its airing. ‘Go Back Couple’, ‘Witch’s Court’ and ‘Avengers Social Club’ are interesting to enjoy and receive good ratings from viewers.

KBS Friday-Saturday drama ‘Go Back Couple’ tells about Ma Jin Joo (Jang Na Ra) who regrets her marriage with Choi Ban Do (Son Ho Joon). After the two are divorced, Ma Jin Joo and Choi Ban Do return to the past when the two are unmarried. Both people are tired of life, forgetting that the relationship is very valuable and fight every day because of a small misunderstanding that became big and then divorced. The moment when wedding rings are removed from their fingers, they return to 20 years ago.

This drama can remind us of the first love that makes the world feel different. The characters returned to 20 years ago, a period in which everyone wants to go back to the time and feels nostalgic.

tvN’s Wednesday-Thursday drama ‘Avengers Social Club’ is pretty scary. This work features the daughter of a conglomerate, a traditional market fisherman, and the wife of a professor who gathered and planned revenge. Soo Kyum’s (Lee Joon Young) appearance adds to the excitement of the story.

Doubts about the impact of women who do not have the strength than doing great actions are indeed attracting attention. Their revenge is quite interesting. To those who can never rebel, they laugh at unity and hierarchy for one purpose of revenge.

Before the drama started, it had received criticism and was considered weak, but its cool charisma and strong characters enhanced its rating. ‘Witch’s Court’ broke the speculation starting its rating with 6.6% and rising to 12%. After that the rating remained at 10% beating the SBS drama ‘Temperature of Love’.

Since its premiere, many were interested in the development of the story of bitter reality with realistic and impressive characters. The main character Jung Ryeo Won portrays the character of Ma Yi Deum as a prosecutor who has ambitions for success in a perfect way.