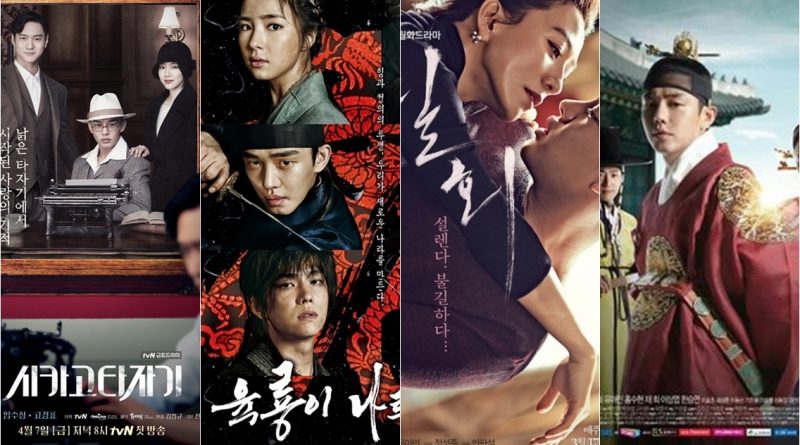 Yoo Ah In was born with the name Eom Hong Sik in Daegu on October 6th, 1986. He decided to drop out of school to continue his career in acting. Yoo Ah In debuted in a teen series titled ‘Sharp 1’ in 2003. Then he began to take an important role in dramas and movies. Yoo Ah In’s good looks can attract many people. He also had a cameo in a drama starring Song Joong Ki and Song Hye Kyo, ‘Descendants of the Sun’. In 2017, Yoo Ah In reportedly suffered from a bone tumor and could not follow military service.

Chicago Typewriter tells about Han Se Joo (Yoo Ah In) a famous writer who has many fans as well as anti-fans. Han Se Joo accidentally found an antique typewriter that when he approached, Se Joo suddenly can imagine his past when the typewriter will be bought, the owner of the typewriter did not allow. Meanwhile, Jeon Seol ( Im Soo Jung) is a hardworking woman who really idolizes Han Se Joo, she is a fan of Se Joo and will buy all the books that have been written by Se Joo. Jeon Seol works as a part-time worker who once dreamed of becoming an Olympic athlete and graduated from her veterinary school but Jeon Seol gave up on her dreams. One day Jeon Seol got a call to send a packet of goods from someone to Han Se Joo. The package contained a typewriter from Chicago that SeMoo would have bought before but was not allowed, but the typewriter suddenly changed his mind and sent the typewriter to Han Se Joo.  It was not easy for Jeon Seol to meet Han Se Joo but thanks to a dog she can meet directly with Se Joo, from this meeting then Jeon Seol realized that it seems that she has ever met Han Se Joo in her previous life.

This drama depicts the ambitions and success stories of people around Prince Lee Bang Won (Yoo Ah In). In addition, there is an ideological and political conflict between Prince Lee Bang Won and Jung Do Jeon (Kim Myung Min), the man who plays the role of King Tae Jo (Chun Ho Jin) to build the Joseon nation. Jung Do Jeon wants the country ruled by ministers, while Lee Bang Won wants absolute power. Finally, Lee Bang Won became King Taejong who was the third king of the Joseon Dynasty. He helps his father, Taejo to establish Joseon. Six Flying Dragon was first released on October 5th, 2015 and consists of 50 episodes. The drama starred Baek Jin Hee, Yoon Hyun Min, Jun In Hwa, Shin Dae Yee, and Do Sang Woo.

Secret Love Affair is a drama that aired on JTBC in 2014. This melodrama starring Yoo Ah In and Kim Hee Ae. Telling about Oh Hye Won (Kim Hee Ae), 40-year-old married woman. She is an elegant, intelligent, and good at communicating with others. In addition to her career as the planning director of the Seohan Arts Foundation, she is also successful. But her life changed after meeting Lee Sun Jae (Yoo Ah In), a talented 20-year-old man who plays the piano. Unfortunately, Sun Jae’s family background is poor and he struggles to realize his dream. To make ends meet, he became a freight courier. Sun Jae is spotted playing piano on the spot where Hye Won works. Hye Won’s husband, Kang Joon Hyung (Park Hyuk Kwon) who works as a lecturer at Art University is looking for a student. He is interested in recruiting Sun Jae. Hye Won herself is a reliable ex-pianist. Since that meeting, Sun Jae likes Hye Won and so does Hye Won.

The drama tells the story of Jang Ok Jung the real name of concubine Jang Hee Bin (Kim Tae Hee), a famous concubine in the Joseon Dynasty who rose to power and became Queen during the Joseon Dynasty. She is renowned for her thirst for power and cruelly plotting all intrigue before she was sentenced to death. She is behind the ousting of King Sukjong’s (Yoo Ah In) wife Queen In Hyun. However, unlike many dramas and movies that tell Jang Ok Jung as a famous criminal, this drama will tell Jang Ok Jung’s story before she becomes concubine Jang Hee Bin and will focus on her role as a fashion designer and cosmetics producer in Joseon era.

September 28, 2017 Ria Comments Off on Wanna One Attended Their First Award Show Since Debut